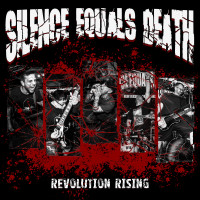 Over the past decade, the Garden State’s Silence Equals Death have made their mark as one of the most unique hardcore bands out there. Rather than apparently having to choose either intensity or melody, SED excels in both. With that also comes some of the best lyrical craftiness of the genre. Their recent EP, Revolution Rising is their best work so far.

As a band whose very name invokes the credo of speaking out for ones beliefs, especially when under the threat of injustice, it comes as no surprise to hear so much inspiration on Revolution Rising coming from the events of 2020. The title track sets this summers racial reckoning to ominous lyrics such as “For revenge of dying/This time the bend/Is about to break into violence”, and pumps them out over an old school hardcore construct.

The speedier “Traitor” takes on what appears to be some kind of very dangerous and unqualified person holding a high ranking public office (“This traitor is hateful/Civil fucking disobedience/All the lies and deception/While the Constitution burns/To ash in front of you/We must unite”).

There’s also more personal anguishes covered, especially on the menacing “No More Ashes”, and a great ‘scene’ track in “Pass the Torch” (“Conceding’s not in our sight/Extending hands built a scene so tight/I long to see you tomorrow/And I want you here with me”). SED put the same amount of discontent and focused rage into their work, no matter who or what they’re pissed off at.

The crisp production on Revolution Rising sounds clean, although at times there can be too much empty space around an instrument. But lyrically and musically, the EP is overall robust and refreshing. Not to mention aggressive, in-your-face hardcore that was meant for times like these.