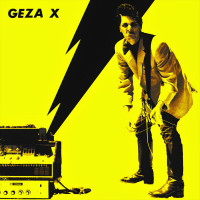 Although he’s known for being the producer that gave the early recordings of Black Flag, Dead Kennedys, the Germs, and the Screamers some real whomp, what’s lesser known about Geza X is that he also released perhaps the most under rated and sadly forgotten classic punk record. You Goddam Kids walked an intersection between Devo, Dead Kennedys, and Zappa and was a fantastic record, but even to this day, it has never really received recognition.

No Matrix records is making the argument that Geza Gideon was unfairly overlooked. “Practicing Mice” / “Me No Wanna Be” represents Geza’s very first demos from 1979. What immediately jumps out is high unique Geza’s guitar is. He uses the instrument to create a wail that sounds like an alarm mixed with malfunctioning machinery. On the A-side, moreso than on later releases, he plays with discord. While the root of the song is a low, bass rumble and the guitars rising whip, he adds in other beeping and buzzing (and mice squeals) to give the song a disorientating feel. While on Kids Geza would find a way to morph these freaky sounds into a slightly more pop oriented sound, here, he leans more towards sound blast, which results in a Beefheart-ish track that is weird, whimsical, and sinister.

As with many of the first wave punk classics, Geza looks at societal breakdown and governmental control. He gives nihilistic advice, “I’m here sporting flees/growing hair on my knees/ I’m here practicing mice/ and if you want to win this game take my advice… get yourself an army!” He sounds frantic and tortured, but seems to have a sort of glee in projecting a manic misery.

The flipside, “Me no wanna be,” again finds Geza pulling a Devo-but-more-evil vibe. A little more catchy than the A-side, Geza takes a reggae beat and jacks it into a steely, punk case. As he details getting sold into slavery, it’s a track, like many foirst wave punk classics, that edges perhaps close to poor taste, but comes out on the side of clever commentary. Geza’s recordings show how skilled and artful he is, and it’s thrilling to hear that even here, in these early days, he’s able to juggle an oblique, artistic image with direct, biting commentary.

The package also comes with an informative essay about Geza detailing the earliest days of the LA punk scene (he was actually around since the end of the hippie era). The record itself is high quality, as is the jacket and layout. All of the care put into this shows that this oft-overlooked artist is worth a second look, and a third, and a fourth, and a fifth, and…