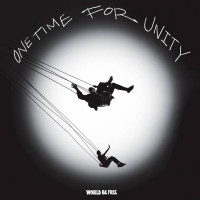 There’s something that’s always seemed a bit presumptuous about the term “supergroup”. Yes, typically people who are in bands used to play in other bands. And yes, many still do. But to call a band a supergroup is often an overstatement; a marketing ploy that implies a wealth of collective experience, but usually doesn’t clarify that the other branches on the band tree broke up after 5 shows, or never recorded a single song.

When it comes to current hardcore bands, there’s perhaps none more genuinely deserving of being called a supergroup than World Be Free. With an ancestry that includes such authoritative names as Terror, Strife, Judge, CIV, Chain of Strength, and Youth of Today, World Be Free helped etch the blueprint for modern hardcore before they even existed.

The key difference between World Be Free’s new EP One Time For Unity and their debut full length The Anti-Circle four years ago is a leaning towards a harder, NYHC style, rather than more melodic. The best example is leadoff track “Acceptance”. It’s a heavy, mid-tempo old schooler, whose lyrics clearly pay tribute to CIV- both in their positive message and in their rhythm structure.

However at the same, Scott Vogel seems to have found a brand new vocal register, one that makes him nearly unrecognizable as the same vocalist of Terror and Buried Alive. The wider range and carrying the tune are a welcome asset to the more melodic of the tracks here, such as “Down & Beyond”.

A mark that stands out throughout the record is the aforementioned lyrical patterns. Especially on the title track (which features guest vocals by Chuck Ragan), the structure of the wording is deliberate and concise. The band uses a consistent phrasing meter, and with no judgement passed for tense shifts and approximate rhymes, the stories and testimonies are crafted with an organic feel that make them lifelike and memorable.

The backline is just as successful. Again, it’s hard to screw up this much experience. But World Be Free still had to make a life of its own. With song lengths just a little above average (for hardcore anyway), the band can take its time to work in intros, solos, breakdowns, and pacing shifts, while still keeping the package intact. When making a record of such texture, they rightfully find it better to let the music do the work rather than the production. As a whole, One Time For Unity has the stripped down sound that works so well in hardcore, but allows for standout performances by these seasoned vets to get lodged in your head.

With the release of their sophomore effort, World Be Free may soon see their own name mentioned in the same breath as the bands that spawned them.