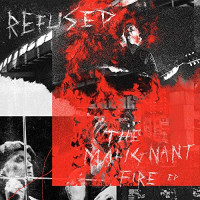 Six years after their reunion, with two LPs and now two Eps under their belts, I think Refused has reached the point where they shouldn’t have to live in the shadow of their 1998 classic, The Shape of Punk to Come: A Chimerical Bombation in 12 Bursts and shouldn’t have to constantly be compared to that one album from 22 years ago. (And yes I’m a hypocrite because I compared their latest LP, War Music to The Shape of Punk to Come in my Top 20 of 2019 list, and I’m technically bringing up the comparison right now, so sue me.) Yes, The Shape of Punk to Come is a great album, probably their best and one that will forever shape the direction of the band. But does every band have to be defined by their best work? Does every new Bad Religion album have to be compared to Suffer or Stranger Than Fiction, or do we just acknowledge that Bad Religion has a particular sound that comes as the culmination of a huge body of work and each album is just the latest variation of that style? The Malignant Fire EP doesn’t necessarily bear much resemblance to the band’s pre-Shape of Punk to Come material, but it’s also informed by their first reunion album, Freedom, and is mostly an extension of their latest LP, War Music.

The album starts with “Malfire,” a track from War Music, which sets the tone of the album in that it has both hardcore and slower moments, but the slower moments come off as more foreboding and even threatening than mellow. The next song, “Born on the Outs,” is a really creative idea in that it’s actually a cover of EDM legends Swedish House Mafia’s song “Greyhound” with lyrics added to the Refused version, the original being an instrumental. It’s not something you’d expect to hear from a punk band, but if there’s any band that can pull it off it’s Refused. I didn’t know EDM and hardcore punk were two genres that shared a border, but apparently they do because Refused do a fantastic job of riding the line between the two. “Organic Organic Organic (Go Fuck Yourself)” with its final verse, or alternate chorus depending on how you want to look at it, contains one of the few moments of humor from the band and, while it’s not a lot of humor, it’s much more than we’re used to from Refused.

The last two tracks, “Faceless Corporate Violence” and “Jackals Can’t be Bothered to Dream,” while certainly staying true to Refused’s historically anti-capitalist stance, are mostly forgettable and throw away tracks. It’s a shame because the rest of the EP feels particularly inspired and creative, but the last two tracks feel like giving up to just get the EP to finish the EP. The songs are hardcore but contain none of the other elements that make Refused the Refused. But if you want an EP with a great first half that you might have to skip the last few tracks, might just be for you.

World Be Free: One Time For Unity [EP]