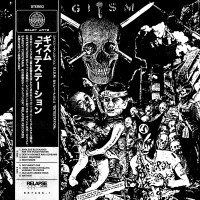 Few albums are shrouded in as much myth as GISM’s debut album Detestation. Released in Japan in 1984 (and not released anywhere else until just now) the album was a collision of extreme styles and art. The question then, and the question now, is how much of this “random collision” was masterful planning and foresight by GISM head Sakevi Yokoyama and how much was genuine, bonafide madness.

Yokoyama is equally as famous for his daring, edgy art as he is for his… distanced… persona. Did he run at the crowd with a live chainsaw at a show? Did he fire live ammunition at another? There’s clear documentation of him literally firing a flamethrower at another crowd.

While the third-hand tales of Yokoyama’s crazy acts can overshadow his art itself, one can’t ignore his detailed, specific touch. Detestation was one of the first releases to merge hardcore punk with thrash metal, and then turn the whole thing topsy-turvy with avant-garde, and sometimes just bizarre choices. Classic opener “Endless Blockades for the Pussyfooter” is driven by guitarist Randy Uchida’s thrash riffs while Yokoyama screams, calls, cries, and wails in different voices. Frankly, it’s spooky how many different voices come from the same throat, recalling The Exorcist. On top of that, the lyrics are as much a dada-ist puzzle as they are a message. On the track, voices randomly say “Napalm stick to kids” and at another point, howls “my cock hurts” and at another “you’re fucking up” in a beach boy accent. Meanwhile, Yokoyama uses a hardcore meets black metal growl, “you no way notice the death in action!”

It’s hard to take one single message out of these clashes, and really, there probably isn’t one single message intended. Part of the puzzle could come from translation issues- the band, native Japanese speakers, mostly sings in English. But, if you look at the collages found on the album covers, or Yokoyama’s art since, his fondness of jamming powerful images against each other to see what the link-up conjures, almost like a chemist would mix various compounds, is what creates the depth of contrast.

The same can be said for the music. There is a clear Crass and Discharge influence here. But for every straight head charge heard on tracks like “Death Agonies and Screams,” Uchida adds in a power metal divebomb, such as the fantastic opening to “Document One.” Or, on “A.B.C. Weapons,” Uchida kicks out a charging Motorhead rush whole Yokoyama wails like a ghoul. It’s also important to note how the band merges distinctly Japanese imagery and concepts with a Western European and North American influence. “Nuclear armed hogs,” which is particularly poignant coming from a Japanese person, has vocals that are reminiscent of the demons in Kurisowa films. Again, Sakevi jams disparate things together in a way that results in confusing, but suggests something greater than the parts. Of course, this suggests that the culture clash is much more directed than might appear at first glance…

Like many of the greatest and most confounding punk albums- Pope Adrian 37, Yes Sir, I Will, The Fucking Cunts Treat Us Like Pricks- there are no answers- and that’s to the credit of the respective bands. Lyrically and conceptually, each of the masterminds behind these works have found puzzles that the conscious, human mind simply cannot process. Similarly, Detestation is as effective, if not more effective on the subconscious and abstract thought process as it is on the literal level. That’s why this bizarre album endures while records with more direct messages, or more direct concepts, have been washed away by the waves of time. You can’t plan something this confusing and this deep... except for when you are Sakevi Yokoyama, maybe you can.

The Relapse reissue is the first official issue of this $400-$1000 album outside of Japan and the first wide release ever. On that level, the release succeeds triumphantly for making this record available and for wiping out the sub-par bootlegs that have drifted around for years. I’ve never heard an original press, but the sound here suggests the album has been crisped up a little, but for the most part, the dark murkiness remains (which is essential to a dark record like this). Contemporary bonus tracks, which have been paired with the album before, are included and extend the LP’s legacy.

Likewise, the art is basically identical to the original release (at least for the CD, which was reviewed here) with one important exception. At first glance, the CD album cover appears to have an OBI strip. However, once the CD shrinkwrap is removed, it’s clear that there is no OBI strip, but rather, a faux-OBI stripped printed directly on top of the art itself.

Why do this? There’s only one answer. The original album had a swastika prominently featured on the album cover. It’s telling that Relapse put the faux-OBI directly over this exact spot on the album. Now, simply using a swastika in art doesn’t equate with condoning racism or fascism. Using a cross in art can be a way of condemning racism, or commenting on the deadly power of group-think. The Melvins once put a swastika on one side of an album and a cross on the flipside (Buzz Osborne has Jewish roots). Motorhead used the Iron Cross hundreds of times. Even the famed Crass logo disassembles a swastika for its own use. (And we shouldn’t have to say it, but racism, neo-Nazism, and all that junk is bad and is the antithesis of punk rock, in case we aren’t being clear enough).

And here, the swastika was included in a collage which also featured pictures of mutilated bodies, suggesting that, perhaps, the image was being used to comment on the horrors of war. But then, if that’s the case, why hide it? And then, even so, how do we deal with the issue of the ’15 Japan-only version of this album released as Determination? That release features the following statement on the cover: “privately owned international Jew banks finance both sides in a war, making a killing from military spending.”

It’s hard to see this as anything but a deeply offensive statement. It could be that there’s something lost in translation. It could be that it’s a misstep in collision art. Or, it could be actually be a deeply offensive statement meant in the earnest. The fact that Relapse doesn’t address this and is somewhat sly about the cover art here is disconcerting, particularly for a label that positions itself as a socially-conscious, forward thinking metal label…

GISM has never been an easy band to digest and frankly, as the years roll on, they are becoming somewhat more difficult sit with. As a whole, the punk community has somewhat turned a blind eye to this issue- hoping that the issues cited above aren’t what they appear to be. There may be some reasonable explanation for these issues, but, as a whole, we’ve yet to see it. Until that issue is resolved, this album may remain as daring art for some, but it will remain troubled art as well.