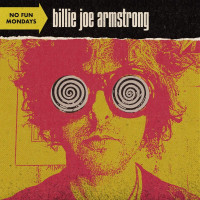 It’s been really amusing to see what different artists have done to record music to pass the time during the COVID pandemic with limited resources, mostly to relieve their own boredom. Laura Jane Grace put out an album of solo material with just a guitar, while Milo Aukerman recorded an EP using a ukelele for some reason. Billie Joe Armstrong, famous Green Day frontman, recorded a series of solo cover songs that he released as digital singles, only to eventually put the series of singles into an album called No Fun Mondays. A lot of the songs covered are 70’s and 80’s pop songs, and the ones that aren’t, Armstrong found a way to make sound like 70’s or 80’s pop with a punk edge. As easy with Adam Schlesinger’s “That Thing You Do,” which is designed to sound like it’s from 1964 anyway,but it’s a little harder to pull that off with “Corpus Christi” by semi-obscure punk band, The Avengers. Somehow, Armstrong manages to pull it off, though, and creates a light and breezy covers album.

And when I say light and breezy, I mean just that. Not a lot of these songs have a lot of depth to them in the first place, and Armstrong wasn’t in any rush to add depth to them. Sure the aforementioned Avengers tune isn’t exactly mindless pop, but most of this is. And I don’t particularly blame Armstrong for wanting to put together an album of fun and upbeat covers when recording in the midst of the COVID crisis. The opening track, “I Think We’re Alone Now,” originally released by Tommy James and the Shondells, but repopularized by pop star Tiffany in 1987, keeps to the original perspective of teenagers fooling around despite Armstrong being 48 with two children, but it somehow manages to keep the childlike vitality and naughtiness of the original. “Manic Monday,” probably the most well-known song on this album to begin with, keeps all the joyousness of the original Bangles song. The 1978 tune “You Can’t Put Your Arms Around a Memory” by Johnny Thunders of New York Dolls fame, comes off especially poignant considering Thunders’s death in 1991. “Police on My Back” is one of the many Clash songs mistakenly thought of as Clash originals, much like “I Fought the Law” which Armstrong also covered with his band, Green Day. In reality, “Police on My Back” was written by a mixed race group called The Equals in 1967 (featuring a young Eddy Grant). I this up because a song about being unfairly harassed by the police makes more sense in the context of the original than later day covers. An all-white punk band in 1981 and a white solo artist in 2020 certainly don’t have the same experience of having the police on their back, but as a pop song rather than a political song, Armstrong brings out the hooks in this song beautifully.

I often like to end a review by talking about how an album fits in with the band’s larger catalogue. But, in addition to the fact that Armstrong’s solo catalogue is extremely small, I don’t think this is a stage in the evolution of Armstrong or Green Day’s work. I think this is mostly just a pet project to relieve boredom and I don’t think it has any particular bearing on where Armstrong has been as an artist before this or where he’s going as an artist after this. I think this record has to be taken in isolation and taken in context of needed something to do during the pandemic. But regardless, No Fun Mondays is a pop-rocking good time.