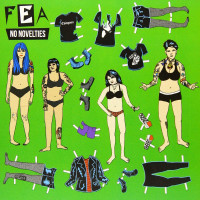 This is an album that I meant to review last year but never did. Part of the reason is that I love this band and think they’re wildly under-appreciated, and I had once made myself a promise that I would keep writing about them until people started paying attention. So, when I heard this album, I was hesitant to write a review of it because I didn’t want to give a bad review and admit that someone I’ve been touting for years had a significant sophomore slump. Fea’s self-titled debut album attracted my attention because it was produced, in part, by Laura Jane Grace and essentially was a riot grrrl revival album with just a touch a rockabilly and a heaping helping of fun. Between their first album being produced by Laura Jane Grace, both of their albums being put out on Joan Jett’s record label, Iggy Pop name dropping them in an interview, and Alice Bag producing this second album, the band is certainly gaining the attention within the industry that they deserve, but it doesn’t seem that has translated into a lot of buzz with fans yet. Sadly, I don’t think No Novelties is going to be the album to get them that notoriety because it’s a big step down in quality from their first album. While the album starts and ends strong, there’s a lot of unnecessary fat in the middle.

The album starts and ends with songs about life in a band, which can be somewhat alienating to an audience that doesn’t share that experience, but frontwoman Letty Martinez’s lyrics manage to be relatable even to those not in a band. “Itch” is about the daily rigors of being in a punk band, but the closing track “Girl Band” is probably the album’s best track. It satirizes the ridiculous questions that they get being an all-girl band (something they weren’t last time I saw them live). My favorite part is when the singer, impersonating an interviewer, asks “What’s it like to be in a girl band?/Is it anything like being in a regular band?” to which the band members respond in unison “Close!” Other highlights of the album include “Spazz” which accurately describes what Martinez aptly calls a “manic brain.” “Pelo Suelto,” one of the three songs on this album in Spanish (there were a lot more on the last album) is another highlight of the album and, if my limited Spanish serves me correctly, translates to “Free Hair.”

The biggest problem is that there are a lot of songs that are technically competent and yet wholly forgettable. And then there’s the lead single, “Let Me Down,” which did, to be fair, live up to its title’s promise of being a let-down. The song is basically a political song that can’t really decide what it’s railing against so it makes vague claims about the media and sex, which are cheap shots to go after, and the song doesn’t go after them particularly well, either. The worst part, for me, is the chorus which says “Just like the movie Idiocracy/This is regression in society.” For one thing, simply name dropping a movie instead of making your point on your own is just lazy. For another, I’ve never seen the movie, but I’ve also never once heard someone say “Have you ever seen the movie Idiocracy?” and follow it up with anything remotely intelligent. This is probably more of a reflection of the movie’s fans than the movie itself, but it hasn’t made me very excited to check out the movie, and doesn’t thrill me in the context of this song, either.

I still think Fea is one of the best bands that nobody is talking about, and I do think they can have a bright future ahead of them, but not if they keep putting out albums with as much filler as No Novelties. Still, there’s some good stuff on this album to build off of, and I really hope they do build off what worked on this album and ditch everything that didn’t.

I Am The Avalanche: DIVE

Zygote: A Wind of Knives [Reissue]