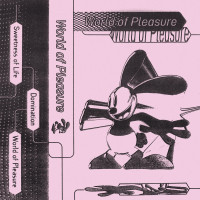 If reviews were like award shows (and let’s hope we never slide that far back on the relevancy scale), the category for “Best New Hardcore Band of 2020” would have one nominee and one winner: World of Pleasure.

Ok, perhaps that’s a bit of an exaggeration. But the honest truth is, it’s not by much. We may only have three songs by the Canadian duo, on a demo titled World of Pleasure, but that alone is enough to set it comfortably atop the heap of exciting new bands of the year.

The first thing that will grab you by the neck, damn near literally, is the vocals of singer Jess Nyx. If you know her from her other band, Mortality Rate, you already know that her broken-glass lined throat should require a permit to walk around in public with. She assaults with it, screaming in a full force rage that will make you stand up and pay attention. And then start breaking stuff.

Anger is the very backbone of World of Pleasure, and it never relents for a moment. Nyx’s screams are backed by absolutely filthy guitar riffs and breakneck drums. This stripped down raw recording is one of those few times where the popping of a hollow snare is a delight, rather than a sin. Likewise, the overall lack of any type of processing sets the perfect stage for this band that values their message of vegan straightedge, and just wants to get straight to the point.

I can’t think of another demo or single by a new band this year that caught me so off guard and made me replay it so many times. World of Pleasure checks every single box one could expect of a new band, and they do it with such calculation, aggression, and talent. The only question I would have for them is: When do we get more?