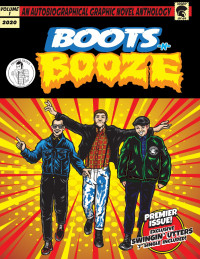 Boots N Booze is an autobiographical graphic novel about growing up as a traditional skinhead in Santa Cruz in the ‘80s. Its title is an homage to, or maybe just borrowed from the long-running ‘80s skinhead zine of the same name. It’s slightly oversized at 8.5” by 11”, and has 44 pages. It also comes with a bonus 7” from Johnny Peebucks & the Swingin’ Utters. The record includes two early live tracks from the Swingin’ Utters recorded at a party written about in the comic.

I am not familiar with any of the names responsible for the art or stories, but they all do a nice job. The artwork alternates between black and white from story to story. Some are done in a somewhat realistic cartoon style, and others are more exaggerated. It might make you wonder what Archie and the gang would look like in Doc Martens, suspenders and flight jackets. Overall, the variety of artists help keep things visually interesting.

Despite the backdrop of the skinhead subculture, these are kind of universal teenage adventures. There’s drinking, hanging with friends, bonding over music, loyalty and fighting. The characters are likeable and relatable. It’s funny, my experience trying to be a punk in the midwest was much different than these west coast kids, but there were still so many similarities. It’s likely that almost anyone who grew up working class can find a way to relate to these misfits. Boots N Booze is a quick read, and if you’re anything like me, when it ends you’ll want more.

Before Swingin’ Utters became a punk household name, Johnny Peebucks & the Swingin’ Utters were a local Bay Area band playing classic oi songs at keg parties. Live at Ritchie’s New Years Eve Party captures the band from this era. Side one of the 7” inch is a cover of Sham 69’s “Tell Us the Truth”. Side two is a 4-Skins song called “Sorry”, that I’m not as familiar with. They both sound raw, but surprisingly good, especially when you consider they were recorded live at a party 30 years ago. It’s sort of like having been there.

This isn't the first pairing of a comic book and music, but it might be the most successful one that I’ve come across. It appeals to nostalgia without wallowing in it. I think it also acknowledges that it’s possible to move beyond your youthful nihilism, while still holding on to part of your youthful idealism. This is officially Boots N Booze Volume 1, hopefully there are more to come.