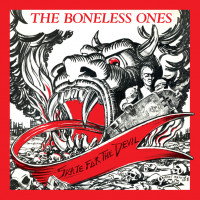 Here is yet another reissue that I am thrilled to have stumbled across. It comes courtesy of Milwaukee’s Beer City Skateboards and Records, who have an excellent track record with resurrecting lost albums from deserving punk and crossover bands. Their vast catalog has come to include new and archival releases from DRI, The Faction, Toxic Reasons, Die Kreuzen, The Loud Ones, Verbal Abuse, MDC and Boris the Sprinkler, just to name a few. It seems like a combination of bands with skateboarding ties, and bands with geographic ties.

The Boneless Ones were an ‘80s California punk/crossover band that had a song on one of the influential Thrasher Skate Rock tapes. They released their sole album, Skate for the Devil, on Boner Records in 1986. (Boner was the Berkeley based label run by Fang’s Tom Flynn.) The Boneless Ones will most likely appeal to fans of any of the previously mentioned bands, as well as bands like Suicidal Tendencies and Excel.

While The Boneless Ones were completely punk in spirit, they weren’t afraid to throw in plenty of thrashy, metallic guitar. The solo on opener “Give It To You” sounds like Kill ‘Em All era Kirk Hammett. “Jason” is a heartfelt tribute to a fallen friend. “On My Mind” might have been a great love song if not for the violent delivery. The words definitely don’t match the music. Like so many of the songs on Skate for the Devil, it involves skateboarding.

The title track is the record’s centerpiece. It manages to reference both Mӧtley Crüe’s “Shout at the Devil” and Charlie Daniels Band’s “The Devil Went Down To Georgia”. Mercifully, it thrashes along without sounding like either. “Miss Fresno” is the type of lust song that you don’t hear often anymore. “Murder” is the rare Boneless Ones track with more serious overtones. Goofy original album closer “The Happy Song” is an upbeat instrumental with a party going on in the background. It’s also the record’s only real throwaway track.

There are a couple of cool bonus tracks too. “Keg Kept A Flowin’” was originally on Skate Rock Volume 3 - Wild Riders of Boards. It’s set to the familiar tune of the blues standard “Train Kept A Rollin’”. “Love To Hate” was initially from a Boner Records compilation with the inspired title Boners Be Poppin’. Dick jokes aside, The Boneless Ones were really good. If you’re a fan of ‘80s skate punk or crossover, you’re going to need Skate for the Devil in your record collection.