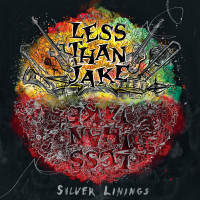 It’s not often a drummer departing from a band has the ability to dramatically alter the framework of the band. This is not to diminish the role of any individual drummer, but it’s rare they are a singular creative force from behind their throne alone. That was not the case with Less Than Jake whose previous drummer and co-founder Vinnie Fiorello was widely recognized as a de facto leader within the band playing a role as lyricist and creative type with his hands on more than just the sticks. But after nearly three decades, Less Than Jake and Fiorello split, former drummer from Teen Idols and The Queers Matt Yonkers is in, and for the first time in seven years the band is out with a new full length titled Silver Linings.

After a bong rip introducing the album, Yonkers makes his presence known right away fitting in drum fills like on opener “The High Cost of Low Living” where they previously didn’t exist and bringing a punk rock mania to songs like “Dear Me” instead of a more tempered stick work. The opener should put to rest any concerns longtime fans had that Less Than Jake would be any amount less than their previous release. But with ska seeing a sudden surge in popularity and a fresh crop of new bands raising the attention of the genre, is Silver Linings more than an exercise in nostalgia?

Less Than Jake accepts that challenge. In a nod to their reality as a band and their own inspiration in bands like the Descendents, “Bill” tackles the topic head on. Less Than Jake lays out that the journey in the quest for all is about the process, not the results, in a hearty and self-aware cheers to drummer and punk rock producer stalwart Bill Stevenson. Silver Linings excels when the band know what their fans want - horn laden melodies, self-deprecating lyrics, and the trade off vocals of guitarist Chris DeMakes and bassist Roger Lima.

“Anytime and Anywhere” sounds like a band rejuvenated mixing a pacing not seen since their Borders and Boundaries and GNV FLA releases with an infectious radio ready chorus. The rollicking energy of “King of the Downside” maintains the half a beer glass full of optimism losers everywhere can find solace in. While still a steady mix of punk rock, pop rock, and ska, Yonkers aggressive drumming gives more dynamic to the more straightforward punk moments like on “Monkey Wrench Myself” which returns the favor when the band leans into their ska influences. “Lost At Home” feels like a spiritual sibling of “The Science of Selling Yourself Short.”

Silver Linings demonstrate why Less Than Jake has so much staying power. Their take on making vodka soaked lemonade out of lemons set to infectious melodies with just enough mainstream appeal to garner fans from multiple generations holds steady with Silver Linings and is even rejuvenated in parts thanks to an important lineup change lesser bands would not have survived.