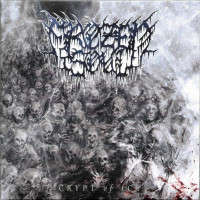 So here we are, a couple of days into the new year and already I’m listening to one of the records that people have been talking about as one of the big death metal releases for 2021. Frozen Soul are from Dallas, Texas, and for a band from such arid climes, they sure do have a heavy fixation on the cold. Maybe that’s why, I guess. Whatever the reason, I applaud their conceptual consistency. It makes for a pleasingly cohesive listening experience and gives the band a crystal-clear sense of character, which is no bad thing if you’re setting out your stall on your debut record, released via heavy music titans Century Media, no less.

Continuing the thematic line, the 10 tracks on this record boast titles like “Arctic Stranglehold”, “Encased in Ice” and the title track, of course. The artwork is pretty much as you would expect, but no less satisfying for it and the lyrics are a frigid, frosty take on frankly, quite typical death metal fare. But again, I’m not casting aspersions here because I don’t think that Frozen Soul are trying to rewrite the death metal rule book so much as look at the bands who wrote chapters of that rule book (Obituary, Bolt Thrower, etc) and then strain the distilled essence of what they created through splintered ice. There are no 12-minute prog opuses, there are no wild departures from the core sound that made people sit up and take notice when the band’s 4-song demo (Encased in Ice) was released in early 2019. Yup, that’s less than 2 years ago. So if you think about a simplified timeline, you’ve got demo on Maggotstomp, sign to Century Media, record the debut full-length during prime pandemic time and then release it into the world - all within 2 years. The production of the record was even handled by ex-guitarist Daniel Schmuck, so Crypt of Ice is the result of very little outside influence, incubation or gestation period and a band who themselves are only a few years old. That is WILD.

The reason I say that is because although there aren’t many left turns, curve balls or big surprises, what there is, by the absolute bucketload, is expertly-crafted death metal songs that are true to the band’s theme and style, that you would happily take from an act in their creative prime. It’s clear where Frozen Soul’s influences lie and they’re faithful and reverential to them as opposed to pushing the style to limits where it becomes more difficult to listen to. Sincerely, this is astonishingly easy to listen to for a band with this degree of heaviness at their disposal. Even Chad Green’s frost-bitten vocals that are equal parts death and black metal in tone are somehow easy and satisfying on the ear. All the tracks are sub-5 minutes, the album clocks in at under 40 minutes total and the riffs and hooks just keep on coming. Moments like the piano and swirling wind in the intro of “Hand of Vengeance” ensure you’re right there in the tundra with them, but then there are Southern hardcore-influenced beatdowns that can’t help but bring to mind Iron Age or Power Trip. Similarly, “Wraith of Death” begins with a fleeting cinematic passage of ominous ambience and bass, but it’s only a moment later that the band settle into a groove that any metal band would be proud of. They then use that as a base to venture into other territories and tempos. They’re always moving, but never to an extent that it becomes a listen that is any more involved than you want to make it for yourself.

I think the true beauty of this record is also, ironically, it’s only downfall. It’s a fantastic death metal record. I literally cannot listen to it without the involuntary head nodding and screwface kicking in. And I love that. It is, however, such an exemplary version of that one thing, that it doesn’t do much to surprise me. To be clear, I don’t think that they need to anything that is wildly out of character and given this is a debut album I’m really nit-picking, but I hope there’s a little bit of expansion and experimentation next time around. But I’ll say it again: for a debut album, from a band who have been around for less than 3 years, this is alarmingly accomplished death metal with genuine identity that should get a lot of people slavering for live shows to come back even more urgently.

Hayley and the Crushers: Church of Flag [Cassingle]