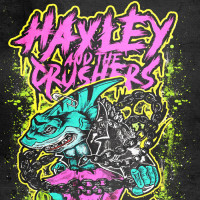 Hayley and the Crushers have had quite the stellar year. The band has certainly kept busy despite the global pandemic. First, the band dropped the critically acclaimed “Vintage Millennial” album. Mid-year, the trio dropped the “Jacaranda” single which was hailed as the feel-good song of the summer. Now, the self-proclaimed “poolside glitter trash” band has released “Church of Flag” in the form of a highly collectible cassingle. What makes this release interesting is that Side A features Hayley Crusher on vocals, with bassist Dr. Cain handling such duties on Side B. Who sang it better? I will leave that for you to decide following this review and checking it out for yourself.

Side A showcases the true Hayley and the Crushers sound. Present are Hayley’s signature surf punk vocals with a touch of new wave an fuzzy guitar tone. Also carrying the load is Dr. Cain’s infectious basslines on the bottom end. Touring member Dougie Tangent (The Putz, Devious Ones, etc.) plays drums on this release to accompany the rhythm. This fun song praises old school guys who have stayed true to punk rock throughout all the trends. The pre-chorus boasts the line “Never gave up. Never give in.” I think many of us in our 40s and beyond can certainly relate. Punk rock isn’t just a genre. It fuels our values and beliefs. This song pays homage to this mantra. The chorus boasts the line “That was who we were, this is who we are” to commend those who have stayed true throughout the years. This is indeed an extremely fun track even though the message seems deeper than one might expect from the Crushers.

Side B showcases Dr. Cain’s vocal abilities. This version is grittier than the polished Side A version. The Crushers go full garage punk on this side of the tape, and it works well. Dr. Cain’s vocals are accompanied by Hayley’s clean backup vocals which make for a cool affect. This version also features more guitar leads and overdubs. Many times, bands simply use the same exact version with different vocals. There is enough variety between the two to almost differentiate them as separate tracks.

Hayley and the Crushers continue to make their mark in the current punk rock scene. This release showcases their versatility to write songs that are less slick than what they have previously recorded. I was initially expecting these two songs to be nothing more than a fun and cool gimmick to tide fans over between releases. What I hear though is potential new ground for the band to cover. I continue to look forward to what this trio has to offer.