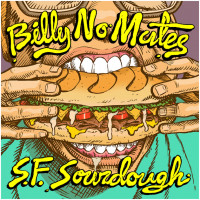 Unless you try records

Ten years ago, Duncan Redmonds (Snuff) got together with some friends from the US to make a record and, as you’d expect, it’s pretty damn good. To be honest, it’s probably really difficult to make a bad record when you have mates like Joey Cape (Lagwagon), Tyson Annicharico (Dead to Me) and Sergie Loobhoff (Samiam).

To get a clear picture of what to expect from this record, just imagine combining the sound and feel of all of the aforementioned bands (plus all of their other projects). “Big Cliche”, for example, features a typical Duncan vocal melody combined with Snuff-like chug a lug mutes and guitar sounds that would fit well on a Dead to Me record. “What’s That Fluffy” and “Silver Love Down Mission St.” are other great examples of this. You can clearly hear Joey Cape's influence throughout the album on songs like “Slap Top” and the slow burner “Your Name in the Lights”. And there are scattered moments of Samiam-esque rock ‘n’ roll scattered around. At times, like on “One Wave Short of a Shipwreck”, an organ and trombone seems audible, even though they’re not actually there, because of Duncan’s distinct songwriting and delivery.

Overall, the record is extremely catchy. The opening track, “If These Streets Could Talk”, is a slow builder, with no real chorus, yet it hooks the listener immediately. “Slap Top”, probably my favorite song on the album, features a great melody and rhythm with layered background vocals at just the right times. “Skulls and Smiles” is another tune that features layered vocals from the backing band by mixing two different parts of the song together, giving the song a bit of a punk Simon and Garfunkel feel at the end. And the band rarely strays from this formula, mixing various different sounds from their previous work and leaning towards great melodies. The few exceptions are on “Sourdough”, which features great music but no singing, and “Angry Song”, the one clear hardcore song.

I’ve always loved Duncan’s songwriting and vocal delivery. And when I found out who was in the band, I knew I would like the album before I even listened to it. It was pretty much what I expected, and that’s a good thing.