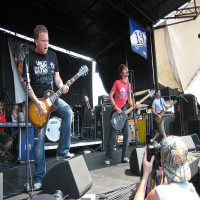 Philadelphia’s the Starting Line surprised fans of the reunited pop punk outfit with a live stream full album play-through of 2005’s Based on a True Story, opening up with singer/bass player Kenny Vasoli, grinning at his long-time friends, “Fuckin, B.O.A.T.S. live, Studio Four!” as the opening duel guitars noodle “Making Love to the Camera,” setting the groundwork for a memorable dive back into the album.

It is Vasoli’s unashamed cheeriness and candid commentary that make the BOATS revisit especially enjoyable, as the heavy riffs of “Inspired By The $” quickly repaint the scenery of the then budding, younger band, experiencing rapid-fire stylistic interests shifting while simultaneously dealing novice to dickhead A&R people, producers, and their brand new major label (Geffen) buzz-killing down their necks.

The band peels through a “revised” song order, and as tight as the group has sounded to date, while taking time in between to explain which songs would have sounded entirely different if the band had more resistance to the label, including a number they absolutely regretted ever writing, (heavily post-produced “The World,”) and even laying to rest the decades old controversy behind the lyrics of Vasoli’s infamous “Bedroom Talk.”

“There is nothing untoward, or solacious about this song, it’s about me losing my virginity, so everyone can, like, cool their jets…? And also, I’m sorry about the lyrics, and I’ll do better next time,” he giggled at his bandmates as drummer Tom Gryskiewicz produced the song’s memorable intro fill.

The Based on a True Story live stream is not only a great watch for fans of the band or that album, but Say It Like You Mean It die-hards that felt betrayed by the sophomore release. It offers an honest representation of the songs, with some insight into the creative dismantlement of much of the Drive Thru era pop punk roster, and the sonic mix and clarity at Studio 4 provide perhaps the best captured audio of the collection of songs in the end.