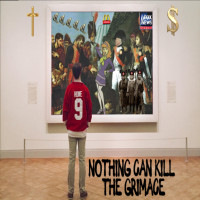 Omaha’s Tiananmen Squares is back with another LP of their grimy, beer-splashed punk rock with Nothing Can Kill the Grimace.

The fourteen song hodge fires open with “Hamburger’s Ketchup Christ,” bending eerie samples into a catchy, fuzzy, mix a-la Rancid in their more care-free days. “Parade of the Homophobes,” “Get Shot,” and “Jelly of the Month Club (in the Key of D)” blaze to completion in about five minutes, before “Monstrocity” takes the record to the top in my opinion. The up-down delivery from drummer Oddrage steers the energy level to a very delightful place.

“Punk Rock (Was) for Dummies” takes the marching tempo a bit quicker in the bpm’s, and offers some of the best vocal trades between bassist Jeff Veto and guitarist Don Knottsferatu. “A Drinking Song for a New Generation” offers some pitted moving basslines from Veto, while a blister of 90 second songs fly by in “Lonely Nights,” “Charles U. Farley, College Graduate,” and “Why?”

Tiananmen Squares’ no-care interpretation, complete with “drummer, play fast” intuition, and the split of pocketed rhythm guitar, opening to quick Freeman-style bass licks, punctuate a stamp of authenticity to Nothing Can Kill the Grimace that speaks volumes about artists that simply try too hard.

Good Men Doing Nothing: Under Promise Under Deliver [EP]

Damien Done: Demos From The Year 2020