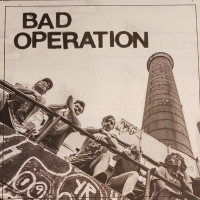 One of the more formally registered complaints about mainstream media’s construction of ska is the association with the goofy and light hearted elements of the 90s third wave’s dominating paradigm. Sure, ska is definitely a fun style of music with a low barrier for entry, but as intentionally constructed, it was deeply political. From the racial unity in the checkerboard patterning to its working class Jamaican roots to the many anthems of resistance the genre birthed, ska was always about more than meets the ears and eyes. Bad Operation’s formation is a product of both those histories, which can sometimes be in tension with each other, ironed out into a new tone.

Recalling heavily the two tone elements The Specials are most famous for, Bad Operation have updated those classic sounds for their debut self-titled release. Bad Operation is a genre pure effort with nary a crunchy chord or screamed vocal that others have mixed into their takes on modern day ska. Opener “Perilous” lays out the question with singer and guitarist Dominic Minix proclaiming, “Is there anything you need / Let the music set you free / Sometimes I find it hard to breath / I wonder if it’s only me?” singing the last words of too many who have died at the hands of state sanctioned racism. It juxtaposes clearly with Bad Operation’s belief in music as an avenue for relief.

Bad Operation understand that resistance is an act of joy. It’s what allows them to bring heavy lyrical topics and marry them to upstroked, danceable rhythms firmly steeped in the genre’s beginnings. “Brain” shows Bad Operation can skank with the best of them and has the energy, if not the aggressiveness, of Destruction by Definition. Back end cuts like “Peachy” and “Baby in Arms” have classic reggae keys driving melodies as the band flirts with elements of dub and dancehall. It's songs like these and “Bad Operation” that show the band can go deep into the genre’s more traditional sounds and pull out something modern.

What’s remarkable about Bad Operation is how quickly they’ve come together to put out a fully fledged sound that understands their genre’s history but with a clear vision for the future. While at times Minix’s soul styled vocals fall a bit short of their aim, it gives the record honesty and a tangibleness that can’t be dismissed for a band that was originally conceived under the weight of its players main projects which include Pears. “Kinda Together” puts this all together as a mid-album extended live jam that introduces the band, their truth, and the players to the listener.

Bad Operation is another welcome addition to the new crop of ska records garnering the genre renewed attention. It’s the most traditional offering yet, but fits right at home alongside their contemporaries breathing new life into the scene.

Damien Done: Demos From The Year 2020