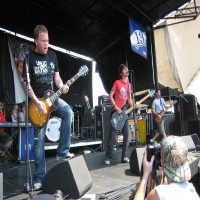 Philly’s The Starting Line performed a third live stream of their catalogue at Studio 4, completing the full album revisits of 2005’s Based on a True Story, and 2007’s Direction. For the final stream, the band referred to the airing as a “best of,” but they exceeded that swimmingly.

The five-piece was incredibly methodical in the previous full album play-throughs, especially in barely touching that material for their final hoorah. The band played one song from each of them right at the end, leaving the rest of the set to honor the groups most popular record in 2002’s Say It Like You Mean It, and fill the empty space with a fanboy’s dream of new and rare material.

TSL dives right in with “Up And Go,” from the 2002 release, and grazes randomly through a third of the album with the same crisp, sonic quality of the other streams. The set fast-forwards 12 years with “Luck” from 2016’s Anyways extended play, before smashing back into the first album. This ideology repeats, as the Say It Like You Mean It showcase crashes into “Quitter,” and the title track from the newer EP. The increase of enthusiasm when jamming the three Anyways songs is slight, but apparent enough to smile about.

This is when the first fanboy audible is called, as bassist/singer Kenny Vasoli rests his bass guitar down to walk to a corner of the room where an acoustic, and a four-track await. He proceeds to play “Make Yourself At Home” and “The Night Life” from 2003’s acoustic The Make Yourself At Home EP, complete with drum machine, compliments of the four-track, and some excellent additional guitar leads from Mike Golla.

There is a humbled mood floating in the studio as the other members return to chip more songs off of Say It Like You Mean It, and even older tune “Greg’s Last Day.” It is the completion of their “final” number “Best of Me” that breathes not only a celebration of friends revisiting nearly their entire discography, but a thank you to any person at home, hoping to hear “that one deep cut.”

The “noncore,” (Vasoli dogs on the general concept of encores,) takes that idea to the max, performing the unreleased fully-rejected-by-label gem “Classic Jazz,” and as you would imagine the song, written in 2005, would fit nicely with the band’s newer discography. This streaming series is at the top of the Starting Lines achievements, and if you weren’t able to check it out, I hope they plan on releasing the audio. Great watch.

Sweet Soul: So Far No Further