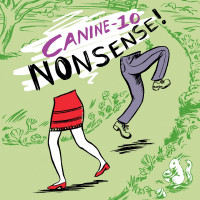 Canine 10 take the LSD-and-bubblegum trip of mid-period Beatles and add a little bit of punk menace. Their new album, Nonsense!, fnds the band aiming to craft an entire LP of that stuff… and they do.

While the band adopts a sort of Liverpool vocal tick, and while they sometimes drift up into the clouds with gauzy, but good spirited music, sometimes they slam the hole thing down into the dark.

Take “Trap!” for instance. While the song has a bright, springy guitar, the focus of the song focuses on someone just before he gets the big whammy: “So please don’t be so proud, you’ll soon be crying loud, let me out, of this trap!” And that’s not to say the whole album is a retro-affair. Really, what the band has done is taken the British invasion, pushed that towards the English power-poppers (who, of course, were all fans of the early and mid-60s stuff) and then envision a world where 1978 and 2021 are the same place.

What is most impressive is how tight this band is. These tracks often approach the pop and catchiness of the Jam or Buzzcocks, without aping either of those groups. Though, it’s also fun when the band deliberately gets a little more viscous or weird. “Love is gonna destroy you” injects a little Johnny Thunders dark-blues into the mix while the reflecting on what’s supposed to be the nicest thing one earth.

The fact is, every track on Nonsense! is a hook-laden bopper. The band has mastered the art of the power-pop while maintaining a certain self-awareness (which most modern power-pop bands forget to do) and also whole keeping a little blackness in the bright (which almost all modern power-poppers forget to do). With such a strong backbone, I think now is the time for them to really freak out and do something weird.

The Starting Line: Live at Studio 4