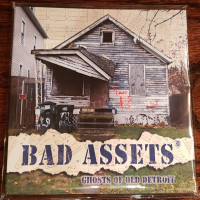 The third Bad Assets full length, Ghosts of Old Detroit, suffered the same fate as a lot of records in 2020. The Motor City street punk stalwarts started recording in the spring, then everything went sideways. They were finally able to finish in August, and the digital and CD versions arrived late in the year. As much as I was looking forward to hearing it, I held out until the vinyl showed up on my porch in early 2021. I must say, that is the proper way to hear a punk album for the first time.

Opening track “Hipster Takeover” jumps right out of the grooves and smacks you in the head. Like many Bad Assets’ songs, it deals with the gentrification issues that Detroit and plenty of other older Midwestern cities face. The back cover picture says it best. It features someone burning a photo of recently deceased Tigers/Red Wings/Little Caesars owner and massive Detroit real estate developer Mark Ilitch. “Hipster Takeover” ends with, “What the fuck are you lookin’ at? This is my neighborhood!” “Not In My Backyard” follows and has a similar message.

“Wasted With Evan” is about another favorite street punk topic - drinking with your friends. It reworks live favorite “Wasted Generation” from the band’s 2012 debut LP, The Spirit of Detroit. “Black & Yellow” is a big fuck you to the Proud Boys. There’s also an inspired cover of Arrogant Bastards’ “Stand Together”. “We’re the Crew” has that classic street punk bravado. “Boots of a Working Man” reminds us of the band and the city's blue collar roots.

“America” explores the duality of loving your country while despising many of its leaders and legacies. “Vultures” is about the criminals preying on Motown. “New Detroit” is Ghosts of Old Detroit’s key song. It mourns the character the city has lost in the name of “progress”. It’s final refrain is “I miss Detroit the way it used to be/Murder city is home to me.” Closer, “Anthem”, is about how we must reclaim our country from the radical elements on both the right and left. All the songs are propelled by driving guitar and drums, plus lots of shouted and gang vocals.

I love the production on Ghosts of Old Detroit. It’s clear sounding but still nice and raw. The vast majority of modern punk albums are too slick sounding to my ear. The songwriting and performances are both on point too.It does a good job of capturing the band’s live energy. If you’re a fan of street punk and oi, Bad Assets and Ghosts of Old Detroit should be on your radar. Definitely recommended.