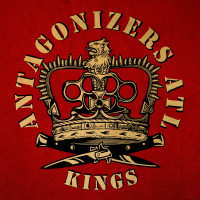 At the time, the name of Antagonizers ATL’s 2016 debut LP, Working Class Street Punk, really summed up the Atlanta quartet. Since then, the size of the band has increased, as has the scope of their sound. Impressively, the now six piece band has been able to evolve without sacrificing one ounce of their blue collar credibility. Ultimately, Kings, Antagonizers ATL’s second full length, is a tour de force from beginning to end.

Opener, “Worries”, has a driving wall of sound that would make Andrew W.K. blush. “Black Clouds” features guest vocals from Noi!se’s Matt Hensen. It’s catchy and familiar in the way that the best oi songs are. Ditto “Trouble”. The title track has a throwback, intentionally over the top type of gang bravado. “No Rest for the Wicked” praises the lost virtue of working hard to get what you want. The first side of the record is nearly flawless.

Side two follows suit and starts strong with “Believe”. “Hold On Hold Strong” takes full advantage of the addition of a full time keyboard player. It has a short, full reggae breakdown, and features the vocals of reggae legend Monty Neysmith. “Problems” might be the strongest track of the second half, with guest vocals from Gang Green leader Chris Doherty. “Marching On” is a street punk nod to the band’s earliest days. Closer, “Us Against the World”, takes an interesting turn and finds Antagonizers ATL channeling their inner Motӧrhead. It works surprisingly well.

It’s always strange when a band that telegraphs its punches is still able to hit so hard. The songs are what you expect, but have an undeniable impact. The sincerity and songwriting consistently carry the day. This record sets the bar high for 2021, as Kings ends up succeeding on just about every level. If you’ve been sleeping on Antagonizers ATL, it’s time to wake up.

Harakiri For The Sky: Maera