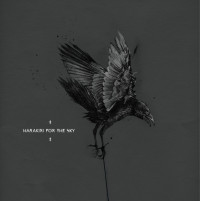 Harakiri For The Sky

The sub-genre landscape for black metal is getting pretty crowded these days. Ever since Sunbather kicked the door down, there has been a far greater opportunity for bands or artists who are in some way black metal-adjacent to get the coverage that, in some cases at least, they rightly deserve. Harakiri for the Sky are a band that have benefited from this opportunity and now, 10 years into their existence as a band, they release this, their 5th studio album. But in this increasingly busy scene, and no longer being the new, shiny band they once were, what do HftS bring to the table?

Hailing from Vienna, it’s probably not a huge surprise that M.S. and J.J. (The 2 core/writing members of the band) have absorbed some of the classicist influences of their hometown. Many black metal bands lean into classical ideas or utilise classical stringed instruments to conjure that sense of folkloristic grandeur that is so desirable in this kind of music, but HftS seem to exude it without necessarily aiming for it in an overt way. There are passages of instrumentation on this record that are nothing short of beautiful. And that isn’t because it’s especially delicate or played on violin or even piano (though piano does feature); it’s a result of the compositional approach that the band take. There’s a patience that comes from being completely confident in your craft and that’s evident throughout this record.

But for all that exquisite craft, there’s still enough grit here for most people. The vocal is still rasped and abrasive and there’s heft to the rhythm guitar, though it’s by no means rough. The production approach could scarcely be further away from the scene’s forbears; the mellifluous leads rise and fall amongst the undulating textures provided by the rhythm section, but it always sounds lush and cinematic. It’s easy to see why Neige from Alcest was happy to provide guest vocals on “Sing For The Damage We’ve Done” and the as-yet anonymous vocalist from Gaerea turns up on “Silver Needle//Golden Dawn”, because not only do HftS command a huge amount of respect as scene trailblazers, but because their musical canvas, as complex and emotive as it is, must be an incredibly inviting prospect for vocalists in the scene.

However, I do have some misgivings. They lie primarily in the vocal and the album’s length. The lesser of two issues by some way, JJ’s vocal is strong and more intelligible than most of his black metal contemporaries but has maybe less immediately obvious character than some. However, the reason this even becomes an issue is the record’s length. Critical eye aside, I like this kind of music a lot, but no-one needs a record of this ilk to be anywhere near this long. To be frank, it’s too long by half. At over 75 minutes, this will test the resolve of even the most ardent fan of the band or genre. It doesn’t ever get to the point where it grates on me, but I simply lose interest. What is being presented is of a good quality, but by track 7 or 8 any initial impact has been dulled to the point that I disengage to a degree.

It doesn’t feel great to criticise a record for doing too much of what it does well, but that’s where we are. I could pick up this record from track 7 onwards and have a lovely time with it, the same as I could if I just listened to tracks 1-6. That’s not even because the songs are samey or interchangeable (though they do live in a relatively consistent sonic pocket) but I just can’t imagine myself choosing to sit down and listen to 75 minutes of it. But then if you’re in the mood to let music wash over you, then this could be an absolute home run. In short, this is enjoyable and expertly crafted atmospheric black metal that I’ll definitely come back to. Just not all in one sitting.