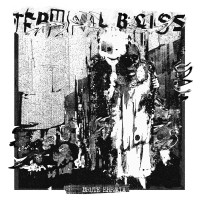 I wasn’t expecting the amount of noise to pierce my eardrums the way it did. It certainly wasn’t because I didn’t know what I was getting into. With Terminal Bliss featuring members of pg. 99, Iron Reagan, and City of Caterpillar and releasing their debut effort on renown heavy label Relapse Records, Brute Err/ata was always going to pack a heavy punch. But from the opening screech seemingly fed backward through the guitar amps, this record will catch the listener off guard no matter what their starting posture.

Clocking in at just over 10 minutes, Brute Err/ata is a relentless fistful of bendy hardcore filtered through a cacuaphony of droning electronics, and whatever the cold, polar opposite of atmospherics is. You’re on track 3 before you can even get your disorientation straight to decipher what you’re hearing. And with that runtime and that much force, it’s probably going to require a second listen anyway.

When you do find your footing, Brute Err/ata is a pulverizing blend of Greg Ginn riffage and playing that’s comfortable on the chaotic edge of the extreme music spectrum. It works because at its core, it’s shit hard hardcore. “Anthropomorbid” is a 30 second blister of a song that has the same type of spastic energy found in Heavy Heavy Low Low. Another band who played spazzed out hardcore and idolized Black Flag. Two references that carry weight throughout the release.

If you're able to push through the numerous coats of noise and feedback, there’s a simple and angry punk record blaring back. “Small One Time Fee” is about the taxing drain of technology. Singer Chris Taylor shouts, “I say demands / But what I really mean is follow me / Our companies will include sympathy / For a small one time fee,” over wailing guitars and plodding drums that echo suburban collapse. Impending technological displacement and its reflection on the economic and the social is a repeated theme throughout Brute Err/ata. The sassy “March of the Grieving Droid” lays out what’s at stake; “Love is sentience / A crisis of existence.”

And just like that, the album is over. After the distorted bass that opens up the final song “Hidden Handed Artificial Harassment Experiment Run Amok.” tears into its final shouts, you’re phased out over droning white noise letting you know your time here is done. Goodbye, see you tomorrow at your meaningless existence helping the computer bill what’s left of your life away. Thanks for your 10 minutes of attention today.

Harakiri For The Sky: Maera