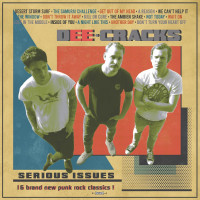 DeeCracks' sound and approach hasn’t changed a whole lot of the years, which should please most of their fans. And it’s safe to say that many listeners will view this as their best record yet.

It could be argued that this album portrays a more mature band, with a slightly slower tempo and a mellower sound than their previous records. But, I’m not so sure the latter statement is entirely true, though. Part of my confusion with this stems from the band’s ability to write songs that are simultaneously aggressive and sweet. Take “Get Out Of My Head “ for example. During the chorus, the uniquely, gravely lead vocals are complimented perfectly by smooth background vocals and a ‘50s drumbeat. It is a near perfect blend of energy and melody. This is evident on many songs like “We Can’t Help It” and “Inside Of You”, among others. And “A Night Like This”, which showcases a ‘50s style waltz, backed with doowop vocals in the verse, still maintains that guttural aggression, all while refraining from being overly cheesy or corny.

Like their previous records, many of the tunes on here are personal, yet universal. “Don’t Throw It Away” is the classic, tragic love song. “Kill or Cure” and “Another Day” are motivational, seize the day type songs, advising the listener to avoid getting stuck in a rut. And the closer, “Don’t Turn Your Heart Off'' convinces us to stay true to our passion. It's a nice positive spin to close out a weighty record. And while much of the subject matter leans towards serious matters, songs like “The Samurai Challenge” (a song about a Japanese drinking game) and the surf rock instrumentals, “Desert Storm Surf”and “The Ambien Shake”, lighten the mood just enough.

The most appealing part about DeeCracks, and consequently this album, is that they have a sound that constantly teeters between familiar and unique. As with past affairs, “Serious Issues” rarely strays from the pop-punk sound that the band is influenced by. Yet, you can’t help but think, “I’ve never really heard a band like this”. That’s not to say that they’re doing anything revolutionary. They are simply writing songs that are real. Songs that are personal. Songs that are serious. But they’re having a good time doing it. And that’s why it works. It’s authentic. It’s energetic. It’s awesome.