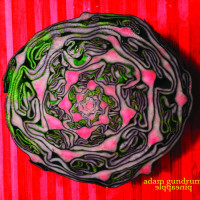 Adam Gundrum is a big fan of the Melvins. It occasionally shows in his music, but it almost always shows in the attention he pays to the details of the packaging of his music. For the last few years, he’s been releasing a series of extremely limited lathe cut 7-inch records. Like the Melvins more unique releases, he’s been hand assembling each piece. Each one is slightly different, and truly is its own piece of art. Also like the Melvins, he’s offering an option for those who want the music without the high cost.

Pineapple compiles 17 songs released between 2017 and 2020. Those 17 songs cover a crazy amount of musical ground. Very little of it is what you’d describe as straight forward. Some of it might be better described as musical deconstruction. Opening track, “Too Many Black Shirts”, starts out as a relatively simple, but oddball folk song. By the end, its acoustic guitar and snare drum give way to something that feels like a train is bearing down on you. In other words, you learn early on to expect the unexpected.

“Hey Whitney” is a short, breezy come-on. It stands in stark contrast to a song like “Time to Leave”, which is a nearly nine minute bluesy, psychedelic monstrosity. It starts out like a Pink Floyd outtake before becoming something much more Beatles-esque. It ends up being quite a pretty song. “Nick” (and his sack of tits) is an absurd little ditty, while “Glitter Bruise” is almost seven minutes of noisy, overdriven grunge, with a Black Sabbath twist in the second half. And so Pineapple goes.

There are also a handful of instrumental tracks. They’re really more like extended soundscapes that happen to feature some impressive guitar work. That makes sense, as Gundrum has recently been doing some soundtrack work. The very best song comes near the end in the form of “Forever, Even After”. You can hear bits of influence, but Gundrum always puts his own unique twist on things. You might hear the previously mentioned Melvins, Pink Floyd, Black Sabbath or Beatles, as well as things like Violent Femmes, Beck or Primus.

Pineapple is not really the type of music you’d expect from the heartland of central Indiana. Hell, it’s not even necessarily what you’d expect from Gundrum, who cut his teeth thrashing around in punk and metal circles. The songs are often weird, psychedelic or high concept. They are not concerned with making you bang your head or shake your ass on the dance floor. The majority succeed as artistic statements as well as rock songs.

Ultimately, Pineapple is a whopping 77 minutes of music. That’s good and bad. You get a lot of bang for your buck, but it’s too long to flow like a proper LP. In other words, at times it feels like a compilation. Gundrum might have been better served by focusing on 8 or 10 tracks. Still, that’s a minor criticism. There’s going to be a lot of stuff you like, maybe a little you don’t. It’s fiercely original, and must be approached with a wide open mind. Much of it is challenging, but if you’re up for the challenge, you will definitely be rewarded.

GWAR: Scumdogs of the Universe [reissue]