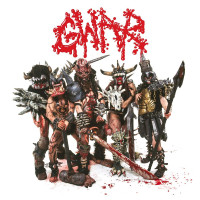 Scumdogs of the Universe is an album about a platoon of intergalactic, hyper-developed creatures known as GWAR that have been banished to the backwards mudhole of Earth because they dared to defy the rules of their creator. Though they are well versed in space travel, war, science, and anatomy, instead of conquering the earth, they are sidetracked by sex, drugs, and rock and roll. The result is that instead of destroying earth and freeing themselves from the blue planet’s gravitational pull, they continue fall prey to excess. From the outside looking in, it may seem like one of the dumbest albums in metal – ghouls that spray the audience with blood, semen, and other fluids while smoking crack on stage. But really, it’s one of the most clever statements in music – not just metal – ever made. That is, are these beasts merely organisms developed without any sense of morality and therefore are the ugliest beings to ever have been… or are they really just us looking into a mirror… and if they’re not, how come their jokes seem to strike our funny bone so directly?

GWAR’s debut Hell-O was a very good slap of punk-metal that detailed the band’s background alongside stories of dog fucking and rocking out. It was a decent first strike, but didn’t seem to capitalize fully on the band’s promise. Scumdogs, released in 1990, fully realized the band.

For one thing, the band stepped out of punk and directly into thrash metal. For a second thing, the new LP had markedly better production which really pulled out the edge of the riffs and highlighted the jokes. For a third thing, the songwriting was simply better.

Opening with “Salaminizer,” which set the stage and described the band’s ethos, Scumdogs’ basic platform was ripping riff (perhaps a bit meatier than the thrash peers of the day) connected with singer Oderus Urungus’ tales of excess and hatred. Yet, while one would suspect the band to drop directly into low grow grime and humor- and while they seem to do that- there’s a great deal of humor and intelligence at work here. “Salaminizer” ridicules the rock star lifestlye, and man’s penchant for losing self-control, all while nodding to N.W.A and introducing the band. “Horror of Yig” borrowed from Apocalypse Now while pointing out that reality can be far more horrific and merciless than most of us believe. “Cool place to park,” showed a distinctive knowledge of ancient Greek mythology.

Meanwhile, the band rocked with punches so hard they could stand up next to Slayer and Celtic Frost. The breakdown on “Maggots” is one of the most jacked up mosh-calls in metal. The riff on “King Queen” was slimy and heavy at the same time.

But, despite the band going toe-to-toe with their contemporaries, they played it wisely by not trying to fight every possible fight. Instead of mastering thrash or hardcore to a t, they injected Zappa and Oingo Boingo-ish weirdness into the mix. “King Queen” finds Oderus calling out in a sort of decadent trill. “Black and Huge” opens with a techno womping. There’s a spastic sax in there somewhere. Also, various GWAR characters pop up throughout the album deepening their own mythos- Sexecutioner details his Marquis De Sade predilections in a hilarious French accent. Manager Sleazy P. Martini runs a gameshow where if you get an answer to a joke wrong, he lets Oderus rip your face off. Beefcake the Mighty closes the album with his shrill scream and a massive headbanger jam.

Even at their inception, (and even with the proto-GWAR Death Piggy), it was clear that GWAR wasn’t just a “joke band.” But here, where they were firing on all cylinders, and came together with precision and vision, they proved that they were really deeper, and more philosophical than those bands that wore flannel and looked sad. That is, GWAR surveyed the horror of the universe and this existence and said, “Fuck it.”

The new re-release is a relatively radical take on the album. The whole thing has been remixed from the ground up. The new version has much greater clarity than the original- you can now hear pretty much every instrument and sound effect at all times. Surprisingly, there is a lot more going on here than anyone ever knew. Also, somewhat of a revelation, is that the instrumentation here is far busier than was previously known- Beefcake’s bass playing is far more in the technical side of things than the original mix let on.

Several songs here are also included in extended form. Notably, “King Queen” is now an eight minute epic with previously cut lyrics back in. Other effects and instruments pop up which were not heard in the original throughout the disc. The CD and LP tracklist is now also altered to accommodate a double LP. (The original vinyl was a single disc and cut a few tunes). The cover is now modified to the band’s original vision, as detailed in their biography.

Because the original release was so iconic and classic, it’s difficult to say that the newest version is “better” than the old one. For many listeners like me, that album is long since burned into our cerebral cortex, so changes are a double edged sword- on one hand, why mess with perfection? But, on the other, they do inject new listening excitement into a well-played LP. How you view post-release tinkering will doubtlessly view your view on the new release. That being said, this album is a classic and timeless in any form. Also, no one will ever say the phrase “this deli tray is unacceptable!” with the zeal and gravity of Oderus Urungus.