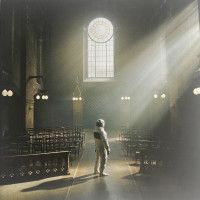 Architects are nearing ‘national treasure’ status over this side of the pond at this point. What was once a tech-metal band who could be found screaming and firing blisteringly complex riffs through the small parochial venues of the UK has now become an arena-filling success story, churning out anthems and goodwill wherever they go. Their story and that of the late Tom Searle is well-known and understandably had a huge influence on the last 2 records. At this stage, 5 years on from Tom’s tragic passing it seems that Architects are moving into another phase of their musical development.

The 4 lead singles from this record, “Animals”, “Black Lungs”, “Dead Butterflies” and “Meteor” have generated a lot of discussion amongst fans. There is a narrative among many that the increased focus on cleaner vocals, use of electronics, strings and general feeling of being ‘less heavy’ is maybe a play for the mainstream success that onetime contemporaries Bring Me The Horizon have enjoyed in recent years. Interestingly, current chief riff-writer and prodigious guitar talent, Josh Middleton brought back his dormant, red-blooded metal band Sylosis last year and released the critically acclaimed Cycle of Suffering. When you look at the sort of riffs on that record, what Architects used to be known for and now what appears on For Those That Wish To Exist, it does beg the question of whether this divergence is a coincidence. Whatever the reality is, there is a definite shift in the sound of this record from the last two outings.

The main reason we’re here though, is to talk about whether that album is good, irrespective of what direction the band have gone in. I’m afraid the best I can offer up is that it is occasionally very good. There are huge songs that will doubtless work well in the right setting; “Discourse Is Dead” has some real fire in its belly and “Dying Is Absolutely Safe” is a truly interesting experiment, being as it is, an acoustic album closer contemplating the nature and meaning of mortality. But I simply cannot listen to this album without feeling that overall the band aren’t playing to their strengths. It’s not even because it’s not heavy because there are some moments on here that are undeniably heavy. Maybe somewhat surprisingly, the guest spot from Simon Neil of Biffy Clyro culminates in something quite wild (and “Goliath” itself feels more urgent than most of the record’s tracks as well). Less surprisingly, when Winston McCall shows up on “Impermanence” the result is arguably the heaviest passage amongst the album’s 15 tracks. One thing that does feel quite tangible is the step backwards in terms of pace. There are very few moments across the whole record that reach the velocity of the opening moments of “Doomsday” or “Nihilist”, for example. That moderation of pace along with the shinier production and instrumentation choices means this record does feel noticeably less exciting and the periods of the album which go almost fully synthetic leave me very cold; “Flight Without Feathers” is effectively a ballad rooted in electronic instrumentation, “An Extraordinary Extinction” opens with some quite basic electronic stabs and persists with a quite unpleasant pulsing bassline throughout the early stages of the song which I don’t think it ever really recovers from.

Sam Carter is also spending far more time than I would like in the softer, smoother, borderline ethereal territory that, again, I don’t feel plays to his strengths. Sam’s ability as a vocalist is not in question but through most of this record, he could be pretty much anyone. And that deadens the band’s impact a lot. When you have a talismanic vocalist rarely using their most effective weapon, it will inevitably result in the output feeling more toothless. Sadly that’s a word that springs to mind were I wanting to summarise this record. The lyrical content is a mix of meditations on the state of the world and how we’re inexorably continuing down the route to cataclysm, interspersed with moments of optimism, which in fairness to the band is probably a good representation of their worldview at this point.

Looking at the guest slots on this record, there are seven No.1 albums between the 3 of them (Parkway have two No.1 records in their native Oz) and I think that is quite telling in terms of the direction the band are facing at this point. I do think Architects deserve success, they deserve recognition and they even deserve adoration for what they’ve created and achieved over the years but if it comes off the back of this record then I for one would feel bittersweet about it. Architects have chosen to try something new and that should be applauded, assuming they’ve done it for the right reasons. And I believe they have; it’s just they do other things dramatically better. That said, there are a host of television and radio-ready tracks on here so who knows where they could be in a year’s time. Architects are something they’ve not been before and for some people that might be exactly what it takes to bring them in, but looking over the diamonds and pearls of the band’s back catalogue, I don’t know that I feel this offering measures up to their best I’m afraid.