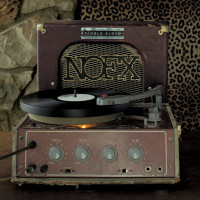 NOFX has been my favorite band for 2 decades. They are almost 40 years old (as a band). I heard 7 of the 10 songs before the album was released. Despite all of this, Single Album still surprises me. I’m talking rug-pulled-out from under you riffs. Painfully honest and imploring lyrics which jump out in unexpected meters. Fat Mike masterfully juxtaposes sardonic punk snottiness with lofty thesis’. This is an album for adults.

‘The Big Drag’ is an operatic masterpiece and a stunning opening track. I think it is the most interesting NOFX song since ‘The Decline’. The timing and structure of the song give it an unsettling tone. Lyrically, it deals with everything from death to songwriting to coming to grips with mortality. And yet, it is surprisingly positive by the end of it.

From there the record goes into more familiar NOFX territory musically. There’s punk, ska, and hardcore. The lyrics have a darker tone than we’re used to. While past records celebrated the highs and lows of partying, ‘Birmingham’ is a stark depiction of drug addiction. But there is still plenty of room for fun. ‘Fuck Euphemism’ has classic Fat Mike wordplay with a well-researched and righteous message at its core.

‘Linewleum’ is hilarious and a uniquely NOFX song. “I think I was born into this world to piss people off” Mike gleefully sings as he pisses all over one of their most beloved songs.

‘Grieve Soto’ is the latest and, I believe, greatest in NOFX’s growing series of heart-wrenching tribute songs lamenting dead punk rockers. It has the tearful sincerity of ‘Doornails’ or ‘I’m So Sorry Tony’, but with surprises and unexpected fun along the way.

In ‘Your Last Resort’ NOFX takes their love of puns to new heights and has a musical pun hidden in the song (I won’t spoil it). There are also some sick unexpected riffs that kind of remind me of the Longest Line EP. I think in time, this will be one of the best closers on a NOFX record.

This is the NOFX record I didn’t know I wanted. If I have to be critical, I guess Mike’s vocals at times are grating but I know that’s what he’s going for. I would have loved to hear the fabled double album but I am glad we got Single Album.

Tigers Jaw: I Won't Care How You Remember Me