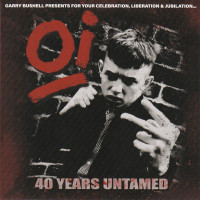 When Oi! The Album came out in 1980, it went a long way toward legitimizing the growing streetpunk movement. It chronicled a new breed of working class punks who carried on the rebellious spirit when punk’s first wave disintegrated. They embraced a blue collar ethic and rejected the fashion and artsy-fartsy tendencies of the class of ‘77.

Oi! The Album was curated by Sounds columnist Garry Bushell, and it featured a bunch of bands that would go on to become (punk) household names. Cockney Rejects, Peter & the Test Tube Babies, 4 Skins, The Exploited, Angelic Upstarts, Slaughter & the Dogs and Cock Sparrer each contributed songs. There have been many more oi compilations of varying degrees of quality since, but that was the one that started it all.

To celebrate the 40th anniversary of Oi! The Album, Garry Bushell curated Oi! 40 Years Untamed. This new volume walks a tightrope between the old school and more modern acts. All but a couple of the songs are brand new or previously unreleased. Still, no matter how you slice it, the big stories and highlights here revolve around a couple of legacy acts.

Oi! 40 Years Untamed opens with a new Cock Sparrer song called “Take It On the Chin”. A new Cock Sparrer song is always a reason to celebrate, and it’s a great track. The other must-hear song is the new one from The Business, “You Know My Name”. It’s the first new music from the band since the death of founder and sole constant member Mickey Fitz in 2016. The current version of The Business is led by prominent former members Steve Whale and Steve Kent, and the new track is really quite good. They just might be able to carry on the band’s proud tradition.

There are also very solid contributions from fellow old timers Cockney Rejects (“Wish You Weren’t Here”) and The Last Resort (“New Disease”). Doug & the Slugz (“Friday In Old Town”) are probably unknown to most people, but here they finally get their due for being one of L.A.’s first oi bands. Bushell’s OG streetpunk band The Gonads (“Federales”) is included, as is his newer studio project Prole (“Sawdust Caesars”).

The remainder of the 15 tracks are devoted to younger bands, and of course, the Pirate’s Press roster is well represented. In addition to Cock Sparrer, Bishops Green contribute “We Decide”. Modern street punk standard bearers The Old Firm Casuals provide a new bootboy mix of “Noddy Holder”. (The original version appeared on 2016’s A Butcher’s Banquet.) The Drowns chip in “One More Pint” from their excellent 2020 album Under Tension. Noi!se finish things off with the equally excellent “Life in the Shade”.

France’s Lion’s Law (“Pathfinder”) and Germany’s Stomper 98 (“Bessere Zeiten”) give a little international flavor to this mostly English and American comp. Crashed Out provide another standout, “Against All Odds”, and European festival favorites Gimp Fist supply “One Shot”.

The problem with reviewing compilation albums is that you tend to end up with something that reads like a laundry list of bands. While that may be the case here too, ultimately it’s an impressive roster of bands.

Fortunately, all the songs are great too. It’s hit after hit without any real clunkers. It’s the best of what fans have come to expect from these type of bands. Referencing Oi! The Album was a calculated gamble. It gave this record a heavy weight of expectation, but ultimately they delivered the goods. While you can never truly go back, Oi! 40 Years Untamed does a commendable job of recapturing the spirit of the early days of oi. Maybe more importantly, it captures the vibrancy of the current generation of street punk.

Nervous Dater: Call in the Mess