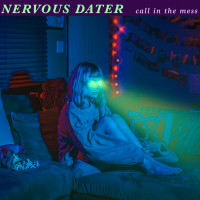 Bands are sort of like fancy, mixed drinks. Each individual brings a combination of factors to the others that gets shaken up and thrown into their music. When they come together to write an album, each song is a combination of influences among the musicians working to create the perfect cocktail through some combination of themselves. It’s part luck and part repetition to get it down. Call in the Mess is like that. Ten songs of its core ingredients shaken up for a refreshing and enjoyable listen.

The press release for Call in the Mess notes its writing was split between vocalist/guitarist Rachel Lightner, bassist Kevin Cunningham, and drummer Andrew Goetz. It brings the band a cohesive spectrum of punky minded indie rock recalling the likes of Motion City Soundtrack, Lemuria, and the Forecast. “Middle Child” is a welcoming introduction to the album. It’s a straight forward rocker just quirky enough to straddle what’s to come over the next 30 minutes. Lightner sings about transitioning her identity to non-binary, “Not sure if I’m doing this right / My brain and my body constantly fight.”

“The Dirt” and “Nothing Left” begin to start showing off the ingredients that make Nervous Dater stand out, but it’s “Farm Song” where Call in the Mess begins to settle in. It’s warm slide guitar illuminates how clever the band is when they hit their stride. It shows the moogy keyboards in “The Dirt” that pepper it’s emo laden chorus and the big power pop guitar solo in the bridge of “Nothing Left” leading directly into it’s final “Sometimes I want to throw my arms in the air / Scream ‘fuck it, I couldn’t even really care” weren’t accidents.

Nervous Dater certainly have their quirks as a band, but it’s core combination also connects and can rock out when called for. That’s where the album excels. The straight up punk rock “Tin Foil Hat” highlights one of the band's assets, the energy of the drums and bass that always keeps Call in the Mess’s pacing throughout. It’s the same type of aggressive power-pop found on “Red String Map” that earns the band’s comparison to Motion City Soundtrack. It’s only when the band drops that energy, see “Everything Right” and “Turn Themselves in the Grave,” that they falter slightly. All the ingredients are there, just a little off.

Call in the Mess is a fun listen. It demonstrates a band hitting some real flavorful notes. You’re sure to enjoy its quirky guitars, biting lyrics, and fuzzy hooks even if the ingredients don’t come out right on a song or two. Some folks may find their new favorite drink.