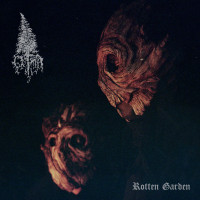 If you’re reading this, then you’ve presumably seen the artwork for this record. When I saw the oaken faces of Grima, I was immediately intrigued. It’s not that masks or pseudonyms are exactly unheard of in black metal let’s be honest, but there was a more earthen, organic, maybe even warmer feeling to the imagery being used for Rotting Garden than you might typically find in Scandinavian black metal artists, for example. Grima, you see, hail from Russia. Which gives a different, but very distinct flavour to their own brand of black metal.

This is the band’s 4th record; the follow-up to 2019’s Will of the Primordial, which followed previous record Tales of the Enchanted Woods from 2017 and debut Devotion to Lord (also the name of the Deafheaven-esque album closer) in 2015. So we’re looking at 4 full-length albums in 6 years at this point, which is pretty darn prolific. You can also tell from the titles that the band’s theme is one that is deeply rooted. There is a focus on nature, history and the elemental in the band’s music. With that comes a touch of folk as you might expect, and that folk element is one of the places where the unique flavours of the band’s home country come to the fore. Instead of the ‘Hey nonny nonny’ vibe that can come with this sort of traditional inflection, songs like “Old Oak” and the title track feel dark, melancholic and steeped in history. Because of this characteristic tone and feel, when these passages turn up, they tend to feel cinematic instead of truly folksy. They’re often accompanied by different sounds as well; indeed the album features rainfall, owls (in the exceptional opener “Cedar and Owls”) and a variety of quite disparate textures from clean guitars, organs and synths to soaring overdriven leads, pitched percussion instruments, accordions and the obligatory blastbeats.

You can probably tell by now that this record is more multi-faceted than black metal purists might favour, but if you’re keen on the transportative qualities of atmospheric black metal, then I can hardly recommend this album enough. One thing that I find myself doing with alarming regularity is perceiving the twin brothers (Velhelm and Morbius) who make up Grima as being characters in a movie as opposed to players in a band and I think that speaks to the strength and consistency of the record’s aesthetic and themes. However, I don’t want to take anything away from the musicality here, because it’s magnificent. The way that the songs are weaved together from many, many parts yet result in something that feels entirely organic is nothing short of magical. Vocally, Villhelm has an impressive range for a black metal vocalist and is comfortably one of the most convincing in the genre I’ve heard for some time. It’s also worth noting how at home the band feel at slower tempos and not just at full blistering pace. They seemingly do both with equal ease and aplomb, making for an incredibly dynamic listening experience. And it really is an experience.

Each year I tend to fall head over heels in love with at least one record of this kind, whether it’s Numenorean, Saor, Deafheaven or whoever. This year it’s happened early because this is majestic stuff. Patient, evocative, moving and subtle, but also furious, powerful and absolutely overflowing with unique character. I’m off to commission a wooden mask immediately.

Nervous Dater: Call in the Mess