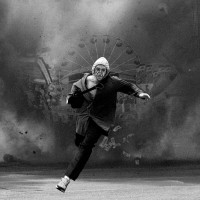 Regional Justice Center’s new album has at least one thing in common with seminal cop propaganda show Law and Order. Episodes are usually broken into two connected parts; first the crime part with the cops followed by the punishment part with the judge and attorneys. Two neatly broken up blocs of television that succinctly tie up all potential ends on a crime meant to placate its viewers into easy binaries about right and wrong, good and bad. But with any criminal record or interactions with the state’s authoritative arms, words sometimes forever branded on a permanent file often fail to tell the real story. Regional Justice Center’s Crime and Punishment explores that unspoken story in two distinct arcs on their new album.

Regional Justice Center has been an artistic introspection of the criminal justice system. On their previous releases, band leader Ian Shelton has paired harrowing lyrics exploring the conditions around our incarceral state with short bursts of extreme hardcore. Crime and Punishment continues in that vein, but with brighter and cleaner production than previously explored. Right away, fans will notice Shelton’s throat shredding screams are a little more decipherable, the riffs aren’t buried under quite the levels of feedback on previous efforts, and the percussion is a little sharper. This brings the music’s death metal elements to the forefront and offers a more accessible listen.

To clarify, accessible is used relatively with Regional Justice Center. Crime and Punishment is still 13 minutes of no frills heavy music. The opening blast beats of “Taught to Steal” set the stage only letting up briefly for a breakdown as Shelton screams, “It is yours / If you want it / All you have to do / Is take it.” The band never takes the foot off the gas only giving listeners quick escapes into this release’s various influences. You can hear the death metal riffage in “Dust Off” and “Concrete” even if it only sticks around for a few bars. “Absence” and “Solvent” pulverizes with hardcore punk and power violence. At times, the band veers into more grindcore territory like on “Violent Crime.”

The album’s two halves are broken into Shelton exploring the connectivity between the systemic issues that often plague people in our criminal justice system and the cyclical nature of harm that system ingrains into its victims. The first half dives into the environmental factors that often lead to crime. With “Absence,” it’s familial conditions, or lack of them, as Shelton screams “Roots wrapped around my neck / Stranglehold of what I’ll become” over heavy guitar grooves. In “Dust Off,” it’s addiction as “Inhale the chemical / Feel the fall” is barked over stuttered rhythms to close out the song. The back half of Crime and Punishment explores how the state perpetuates what it’s trying to stop through incarceration. This is summed up succinctly with the final words of the album on closing track “...and Punishment.” “I wish there was a way home / But now we’re left to carry the weight.”

Crime and Punishment has Regional Justice Center stepping up their ambitions by emphasizing more clearly what they do best. They’ll fit right into the set of bands finding success by fusing death metal and hardcore together. But it’s when the band spins offs into more creative fusions, even if briefly on these minute long ragers, that their talent really stands out. Sure, Law and Order was the original, but nobody beats Detective Goren. He’ll even make you forget the show is actually about cops.