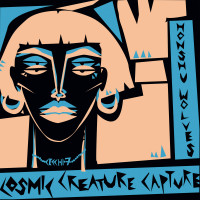 The sticker on the cover of the second Honshu Wolves record says, “From the back alleys in Bern, Switzerland...Maryanne Shewolf and her pack sing their own very trippy psychedelic blues trash.” I don’t know how I could have said it any better. To me, Honshu Wolves and Cosmic Creature Capture are just another painful reminder that rock and roll is thriving in Europe even if the kids in America couldn't care less.

The temptation would be to compare Honshu Wolves to The Darts or The Jackets. There are certainly similarities, but the Swiss trio never veers that far into punk, or even hard rock territory. There are no screaming guitar acrobatics or crunchy, distorted riffs. The guitars are either clean and drenched in surfy reverb or fuzzed out. That’s not to say that Maryanne Shewolf’s guitar playing isn’t good, but it serves the song rather than the ego. Her vocals are also usually on the subdued side, but occasionally she does howl.

Cosmic Creature Capture has only nine tracks, but they average over four minutes a piece. There’s plenty of room for them to stretch out and blur the genre boundaries between blues, garage rock, surf, space rock and the ‘60s girl groups. They slowly build in tension and intensity, and their beauty is in the successful use of the loud/quiet dynamic. You can feel the emotional shift when the music swells and recedes.

Check out the upbeat musical journey of “Godess” or the slower “Tell Me” to get a good feel for what Honshu Wolves encompass. I’m generally drawn to more aggressive music, but Honshu Wolves are a great listen when you’re looking to chill out a bit. If this band were a strain of weed, they’d definitely be a creeper. They don’t knock you out all at once, but provide a sustained, mellow high, Throw on Cosmic Creature Capture after a long day at the grind, and let Shewolf and company carry you off to a trippy, beautiful place.