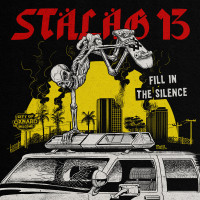 Along with Agression, Dr.Know and Ill Repute, Stalag 13 were one of the four original Nardcore bands. (Nardcore being the term adopted by the punk and hardcore bands from the seaside L.A. suburb of Oxnard, CA.) Stalag 13 formed in 1981, and released their classic nine song EP, In Control, in 1984. Over the years it’s had some tracks added, and the easiest version to find is essentially a full length on Dr. Strange/Puke N Vomit Records.

Stalag 13 had mostly called it quits by the dawn of the ‘90s, but have existed in fits and starts since then. When original singer Ron Baird moved to Australia and was replaced by second generation Nardcore singer John Crerar (The Missing 23rd, Stop Breathing and a bunch more), the band really started to pick up steam again. With Baird’s blessing, Stalag 13 have continued to thrive and even did their first European and Japanese tours.

Fill In The Silence is the true follow up to In Control, 37 years later. With Crerar and three of the five members of the classic lineup in tow, Stalag 13 have somehow managed to capture lightning in a bottle for a second time. It’s impressive how Fill In The Silence is able bridge the gap between classic and modern sounding punk and hardcore. It’s old school songs with the benefit of new school production.

About half the songs on the record are truly old school. “Conditioned” and “Black Stix” both appeared on In Control. The new version of “Conditioned” is a relatively faithful reproduction of the original. “Black Stix/Silver Badge” becomes “Black Stix”, and is updated to reflect the current state of police brutality. Both are highlights. A handful of the songs have been in the band’s live set for over 35 years, and are reworked from a poorly recorded early ‘80s demo.

The rest are entirely new. All the songs are good, and picking favorites is not easy. Like In Control, most of the songs have positive messages. The title track, “Believe In Yourself”, “Looking Forward” and “Standing United” are good examples. Musically, the songs are fast enough for those who still skate to punk and vintage SoCal hardcore. The bottom line - Stalag 13 have made an album worthy of their legacy. Fill In The Silence deserves its own place in Nardcore lore.