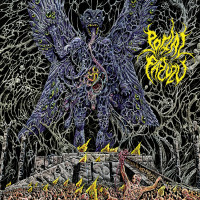 This might surprise some of you, but I listen to a lot of death metal. I know, shocking. What this does occasionally mean is that when I hear what I deem to be pretty standard death metal, then it can rather wash over me. What some people might deem to be extreme and/or noteworthy, I can be guilty of perceiving as pedestrian, basically. So when an underground death metal band, self-releasing their debut record comes onto my radar, I will typically approach it with limited expectations. At this point, in walk Portal of Pazuzu.

Portal of Pazuzu are a Detroit-based death metal band incorporating a number of ex-members of other bands at the extreme end of the spectrum. I don’t think it’s unfair to say that few of those bands have achieved a great deal of success, but maybe that is something that could change with the birth of this new project. There isn’t a great deal of information about them online apart from the fact that they’re influenced by the likes of Suffocation, Morbid Angel, et al. Which is probably not the most surprising insight to be frank. The record starts with “Call to Prayer” which serves as something of an introduction to the band’s sound, but also effectively as an intro for first ‘proper’ song “Eternal Insight”, as the beat-long pause between the songs (punctuated by the sound of a gun being cocked) means they’re basically 2 parts of the same song. But what a song. Syncopated chugging riffs with satisfyingly slimy, wobbly tremolo picking elements, a powerful, cavernous vocal and shifts in time signatures and sections coming at you a hundred miles an hour. It’s an incredibly strong opening to a debut self-released album from an underground band. But what’s more impressive is that the avalanche of riffs and gnarled, monstrous hooks keeps coming and doesn’t stop for the record’s half-hour runtime.

My criticisms of this record are almost exclusively aligned to the production. There could be a little more low-end to bulk out the sound, maybe. The album has quite a strong through-line but might benefit from some finessing to really sell the theme (there is a smidgen in “Pazunia” and this makes it one of the album’s high points for me), but the main issue I have is with the drums. Straight off the bat I want to say that this isn’t an issue with the drummer/drumming itself, merely the way they’ve been recorded/produced. The kicks sound too tight and borderline mechanical in their delivery (which feels at odds with the general organic and grimy feel of the record), the cymbals bleed over too much and (maybe fortunately give these facts) the drums sit quite low in the mix so they lose what presence they might otherwise have. Also, the bass does get a similar backseat treatment, meaning this is an incredibly guitar-heavy album production-wise. I think the guitars (there are 2 in this 5-piece line up) and vocals are indeed the stars, but that shouldn’t be to the exclusion of the entire rhythm section, let’s be fair.

Allowing for the fact that there is an intro track and that album closer “Winds of Famine” is a kind of demonic spoken-word outro (again, there is a little more fleshing out of the theme here, but it feels rather separate from the body of the record) then we have 8 very good death metal songs from a band who clearly have talent, ideas, and an identity. I’ve had heaps of fun with this in the last few weeks and I’m legitimately excited about the prospect of what they could do with a little more production nous and ideally, a label behind them. I’m looking at you, Maggotstomp/Prosthetic/Church Road/20 Buck Spin…

Stalag 13: Fill In The Silence