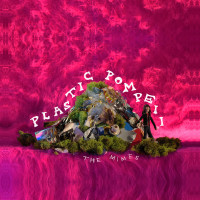 All three of The Mimes - Maura Weaver, Megan Schroer, John Hoffman - established themselves as jangly, pop-punkers that often veered into folk or something adjacent. All three are talented at the, shall we say, earnest and vulnerable form, and they’ve built themselves a fanbase in those genres by being able to pluck an acoustic guitar and sing heartfelt lyrics better than almost anyone else. How… surprising… that the Mimes project, wherein the trio make freaky-deaky music and often wonder off into Pink floyd style acid-soundtrips, might not only be their best thing to date, but it also might reveal each member’s strongest talents.

Sure, at its core, Plastic Pompeii, is basically pop-punky- there are fuzzed out riffs, catchy melodies, and a fair amount of earnest emotion. However, instead of stopping there, the band then drips a sort of dark wax over the proceeding and take what most bands would make (See-I’m-melancholy-just-like-you) and warp it into something scarier (i.e. we-are-freaks-from-the-blackest-cirner-of-the-iniverse). Just check out “Hello Tokyo.” The song has what sounds like a happy “yellow Submarine” organ, except it sounds horribly broken. On top of that, a spaced out, distant wash is splashed over the top, recalling the dark-paranoia of Their Satanic Majesties Request. And THEN, Megan I think, starts detailing the time she saw some horrible surgery in LSD-world. The masterstroke here is that while there are edges of sonic terror throughout, The core is light and poppy making these dark waters inviting. DAMN.

For some reason - Covid? Personal stuff? Existential terror? - a negative streak runs through these tracks. “The Ugliest One” proclaims “I was the ugliest one there / Me and all of my friends/ They’ll never wanna see my face again.” Or on Mockingbird, “Hey there mocking bird/ you’re screaming all that has been heard / into a nasty canyon in the night.” “Cold Decay” could pass for Rudimentary Peni lyrics. And perhaps interestingly, sometimes the band provides a little hope… and sometimes they don’t. And that’s not to mention the dark sounds that hiss through this release.

You could make the argument that it was daring for this trio to make this release, but frankly, it probably wasn’t- that is, if the release bombed, it would get blown away with the multitudes of other Covid project and no one would really care or keep track. And that’s probably why the album is so successful. Nothing here seems overthought or pretentious. It’s just three talented individuals throwing a collection of ideas together and seeing how they assemble. Yet, instead of random collision, behind the six hands here, there appears to be some kind of force or energy creating a cohesion- is that by luck or by some design of some otherworldly mind? Spooky…

The thing with Mimes is that they are often so off putting because they look like humans, except they are more ghoulish. They move like humans, except their movements are enlarged and grotesque. Usually, they’re supposed to make you laugh, but they usually end of freaking you out or even humiliating you. By acting nearly human (but not quite) they can stir some of the deepest, and some of the least comfortable human emotions. With that in mind, you’ll have a hard time finding a more fittingly named band than this.