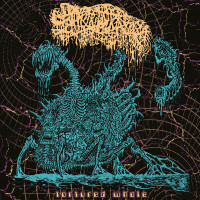 ‘Down-tuned drug death’ is how Sanguisugabogg describe their sound. Sets the stall out, doesn’t it? Oddly though, it doesn’t necessarily highlight their overt love of all things gore and splatter. That aspect does become clear as soon as you look at their artwork or song titles, though. You can probably also discern from song titles like “Dead As Shit”, “Menstrual Envy” and maybe best of all “Dick Filet” that there is also a hint of tongue being planted in cheek. Don’t be fooled into thinking this isn’t a record to be taken seriously, though. A decent portion of the death metal community have been waiting for this record with bated breath for some time now and it’s with great pleasure that I can report the wait has been worth every second.

The sound of this record hits you immediately. “Menstrual Envy” greets you with Devin Swank’s raspy gurgle, Cody Davidson’s tribal-sounding drums (with one of the most delicious snare sounds you could wish for) and the band’s signature bass and guitar attack (ably provided by Ced Davis and Cameron Boggs respectively) of huge, rumbling, rhythmic chugging, pinned down by panic chords and harmonics. On top of that you’re also struck by higher-register riffs and tempo changes a lot more frequently then you might be expecting. All in all it makes for a surprisingly varied listen in terms of each individual song’s characteristics and the air they create. As an example, “Dragged By A Truck” is as good a death metal party rager as you’ll hear this year. Two and a half minutes of head-banging fodder with a central riff that will be stuck in your head for months to come. But the very next track “Pornographic” is just over 2 minutes of ambient noise, synths and warm, electronic keys that are reminiscent of both 90’s euphoric dance music and an 80’s matinee dream sequence simultaneously. It’s an initially baffling change of pace and tone, I’ll be honest. And yet now having listened to it many times, I’m very glad that it exists. “Pornographic”, and also “Interlube”, serve as a kind of amuse-bouche to the rest of the album, in essence. You know when bands have a huge dynamic range within a single song, and it makes the heavy bits feel all the heavier? Well that’s this; except the songs are self-contained and the main body of the album’s content refuses staunchly to deviate from being absurdly, disgustingly heavy.

Within that heaviness though, there’s a sort of knowing, neon, knuckle-headedness that is just incredibly infectious. On top of what I’ve already mentioned, you have huge, swelling waves of groove, such as in the first half of recent single “Dead As Shit”, borderline doom in “Urinary Ichor” and full-on caveman death in “Posthumous Compersion” yet it still always feels totally like the band’s own sound. And with that comes a sense of fun throughout, which makes this album very easy to pick up and play. It’s not a huge, sprawling opus that takes a huge amount of concentration and focus to unpick, but there is still enough nuance and complexity to it to reward repeat listens. This is going to sound like a ridiculous comparison on the face of it, but it kind of reminds me of Doggystyle by Snoop. It makes you feel party-ready from the first bars, it feels high, sun-drenched and there’s an innate sense of humour in the whole thing. So weird comparison or not, I mean it positively.

In short, Sanguisugabogg aren’t trying to be Blood Incantation. They’re far closer to Cannibal Corpse in their tone and style, yet what they’re offering up still sounds fresh and exciting. I spoke to Cameron Boggs recently and he said that although he listens to loads of straight-faced death metal, him and the rest of the band are: “Weirdos. We’re goofy, stoned as shit all the time and I’d rather people could relate to the record instead of it being too serious. We’ll give you the gore, but we’re gonna laugh about it, too.” It must be said that I think that sensibility comes across incredibly clearly. The record is like a 34-minute violent, funny, hallucinogenic episode. To some people that will sound terrifying. To others it will sound like a damn good time and it’s probably not a coincidence that those are the same people who you’ll probably find at Sanguisugabogg’s shows in the coming months and years. Sign me the fuck up.