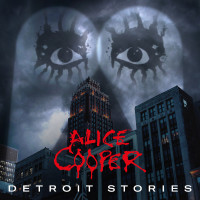 Alice Cooper has always somewhat dubiously claimed Detroit as his hometown. Sure, he was born there, but his family soon moved to Arizona, where the original Alice Cooper Group formed before moving to L.A. and cutting their teeth there. It wasn’t until the band’s third album that they decided to move to Detroit (and only for a few years at that- they were back in LA pretty soon and Coop now lives outside Phoenix). Still, there is something to be said that, instead of arbitrarily saying that wherever they were had the best rock scene (“Arizona is the best!” “LA is the best!”) the band picked the holy ground of the baddest of the bad rockers and moved to compete with the Stooges, MC5, Mitch Ryder, Suzi Quattro, and many others. That’s bold.

So, while the concept of Detroit Stories may be up for debate, Alice and a wide range of collaborators hone back in on the Motor city’s ‘70s hard rock glory days and channel that energy to make what is probably Cooper’s best album since the early ‘80s.. And arguably since the mid-70s. For the release, Cooper pulled in a bunch of his friends. Wayne Kramer is all over the disc, as is Paul Randolph, and Mark Farner. Importantly, all of those hard hitters were raised on the blues, not rock, and that depth of sound, and organic playing, washes throughout the disc. “Rock & Roll,” which while is a Lou Reed cover was made locally famous by Mitch Ryder (an interesting first shot), has more soul and grit than it has kick-out -the-jam-motherfucker furor. The actual playing of Detroit is promoted over the steely power for which the city is, perhaps, now more known. That’s not necessarily a bad thing. The re-cut of MC5’s “Sister Anne” is fast and tight, showing that this band knows that rock and roll is just just blues sped up and they nail that formula.

Interestingly, the release also looks backwards in other areas. The living members of the Original Alice Cooper Group crop up, most notably on “I hate you.” The track is sort of a brother tune to “Gutter Cats vs. the Jets” from Schools Out where the band would mix a tongue-in-cheek theatricality with a hint of actual menace. On the track, the band yells at each other, with each member stating how much they hate the others. Of course, guitarist Glen Buxton gets the harshest blast for committing that most heinous crime of being dead for 24 years prior to recording. It’s fun to hear the original crew smashing it up and it also underscores how singular the chemistry of that band was. Even some four decades haven’t diminished their style and edge, even if the new tracks are quite as whacked out as “Halo of flies” or “Dead Babies.”

Lyrically, Coop plays it fairly straightforward, perhaps nodding to rock- especially Detroit rock’s- main fixations.. There are a lot of songs here about how great rock and roll is and getting blown off by the ladies and some random maniacs. Cooper does take some turns here, some which are more effective than other. Last year’s “Don;t give up,” which was a sort of 80s anthem written for those suffering from Covid depression has now been re-written as an anti-suicide track. Two other tunes are a bit more difficult to parse and sometimes wander into “hey you kids, get off my lawn!” territory. “Our love will change the world” is a re-working of a forgotten song by the fairly obscure Outrageous Cherry.” Alice calls out, “we have so little regard for anything!” Is he shaking his finger at the man… or the rowdy kids that won’t respect the man? Maybe that’s the clever turn. The track very much recalls summer of love anthems, particularly with the title. Add the bright, bubblegum-esque texture, and the track is something Cooper hasn’t done before, which isn’t easy to do in a nearly 60 year career.

While that is a risk that pays off, “Shut up and rock” sinks, sadly. On the track, Alice castigates bands for using their platform to express social and political opinions. This is frustrating for a number of reasons. First, now more than ever, intelligent discussion and analysis needs to be saluted, especially in art, not diminished, in this age of “fake news.” Imagine telling Crass or Stevie Wonder or Peter Tosh or Ari Up to “shut up and rock.” What a waste of art and intelligent discussion that would be. Second, it’s a downright hypocritical track. Alice has recently taken the turn of saying that the Alice Cooper band was always about “theatre” and “humor” and nothing more. Really? “Elected” doesn't have any political overtones? Billion Dollar Babies doesn’t comment on modern decadence and corruption? “I love America” doesn’t allude to gluttony and the crassness of modern marketing?- “I watch the A-Team every Tuesday night/ I graduated but I ain’t too bright.” Even this very album includes “Hail Mary” which uses some of the most sacred Catholic imagery to say some lady is hot. On top of that, even a track that makes the point that “band’s shouldn’t be political” is a political statement. Maybe there’s the art right there, but it is extremely frustrating for the master architect of horror rock and many other ideas to be so smugly dismissive.

All of that being said, the bump doesn’t derail the album. A;lice for his part still sounds amazing and he really does sound like he’s having a blast. A remarkable feat considering this is his 28th album. And, on top of that, it’s one of his best “solo” LPs. The criticism of some later day Coop albums is that they feel a little underbaked- The Eyes of Alice Cooper, Raise your fist and yell, and a few others. Detroit Stories is fully formed and tells its story without trying too hard… or too little. The band cranks on the engine and lets Jesus… err… the Ashetons, Fred Sonic Smith, and Glen Buxton… take the wheel and they drive this record on home.