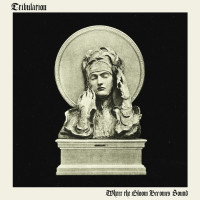 I almost decided not to review this record. It seems that it’s been so widely critically acclaimed that it would have felt like gilding the lily somewhat. But what struck me when listening to this record over the last month or two is how much stylistic distance the band have covered since their early days. So I suppose I’m here to talk about how much you shouldn’t be concerned by the death metal tag that still floats around Tribulation. It was a tag well-deserved in the first few releases from the band (2009’s The Horror is far more consistent with the genre’s tropes) but in the intervening 12 years, something very interesting has happened to Tribulation.

What has happened to Tribulation is that they have elected to ignore the more typical constraints of death metal and even, to some extent, of the melodeath style championed by their countryfolk In Flames, At The Gates and Dark Tranquillity. Where those bands have forged their own paths and diverged from one another to an extent, you can still very clearly draw the dotted lines back to the same point of origin. Whereas Tribulation have become almost an island in their style and approach. First of all, (trigger warning) they do retain an extreme metal vocal. That might be enough on its own to deter some people, but I would implore you to read on. The sonic sound of the band has a spectrum as broad as elements of NWOBHM, neo-classical, Steinman-esque melodrama and gothic grandeur. Tribulation feel original while also drawing from a deep, deep well of their musical forebears.

Let me try and explain a bit better. This album, 10 songs, includes some of the most cinematic and frankly, ‘D and D’ metal you’ll hear all year. Opener “In Remembrance” and “Leviathans” are perfect examples thereof. There is a full track of solo classical, gothic piano in “Lethe”, complete with creaking pedals (it’s utterly enthralling), which then leads straight into one of the best straight-up heavy metal songs in recent years in “Daughter of the Djinn”, boasting some of the most delicious lead guitar work you could wish for. I suppose what I find most impressive is the breadth of the emotional canvas which the band are able to produce across the record’s 48-minute runtime. Metal is maybe not best known for its range, but in the case of Where The Gloom Becomes Sound, yes, there’s melancholy, malevolence and majesty...but there’s also triumph and longing. Disaster and redemption. It has the feel of a cross between Bill and Ted (the first two) and an older production of Lord of the Rings; it’s earthy and warm, but revels in its own…metalness. All the while, it graciously bows its head to its influences without actually sounding like any of them. Surely what all the best bands do.

I can’t pretend I was on board with Tribulation from day one. Or day two or three for that matter. But since 2018’s Down Below they’ve had my attention. I went back, listened and understood their roots. Maybe that’s part of the reason I’m so impressed with where they are now. I understand some people won’t get on with the vocal. I get that dramatic goth stuff is nails down a chalkboard for others. But if you’re on board with heavy metal doing heavy metal stuff, then the quality on display here means you owe it to yourself to listen. It’s produced magnificently and I can’t really find a great deal of fault in it, truth be told. I wouldn’t mind if they bared their teeth and picked up the tempo a bit more occasionally, but then ironically, I’m one of those death metal guys who on the face of it have less of a claim to Tribulation now than maybe I once did. So ignore me on that, but listen to the rest of this review because Tribulation are a class act.

Thirdface: Do It With A Smile