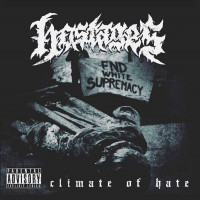 The timely comparison would be to say that Hostages second LP, Climate of Hate, hits like a 200,000 ton tanker run aground in the Suez Canal. But let’s be honest, our generation’s grandchildren won’t know what the Suez Canal is cause the whole damn thing will be under water with sea level rise. So instead Climate of Hate hits with tonnage of a toppled stone Columbus statue hitting the ground, as seen on the cover, and the barrage that follows is analogous to the jubilant cheers of the hopeful protestors who tore it down.

Hostages establish a familiar pattern throughout Climate of Hate. The beatdown hardcore is mid-paced, like a death metal chug, occasionally slowing down to a stomp, occasionally speeding up to a more familiar hardcore tempo. It sounds like something you’d watch premiered on Hardcore Worldwide on YouTube. There’s plenty of opportunities to tear shit up in the pit, with breakdowns being both frequent and chunky and heavy as fuck. And with your arms windmilling and legs flailing in high kicks, it’ll be easy to keep that 6ft distance. Deep guttural roars abound, verging into deathcore grunts/pig squeals in places. Occasionally there’s some solid dynamics at work with the vocals, like when they incorporate spoken vocals and your more traditional youth crew-eqsue clean chants, which bring a great balance to the deeper bellows. Like in “Tyrant” or “No Justice” for example. I do wish they incorporated this element more, to bring a little more diversity in the delivery in these songs.

Elsewhere “Climate of Hate” chugs along, inserting the odd pinch harmonic bringing to mind mid-2000s metalcore. “Despair” is one of the most variable songs here. Yeah, it adheres to the pattern, but Hostages pick up the pace in places. Then there’s this really stark passage where everything drops out to feature a news report sound clip – about the policing facing off with protesters – before reverting back to the lowest of the low. And then it closes out with these melancholic keys, a cool feature. Guest vocalists abound and give a fun mix-it-up feel to those songs. Can't help but think that spacing them out, instead of having them occupy the second half of the record, would've given a more natural, flowing feel and kept things from feeling too redundant. “La Muerte Roja,” quite possibly my favorite here, has more up-tempo segments with more decipherable hardcore shouts instead of solely relying on the steady, staccato guttural exhalations. “Chinga La Migra” has a bit of chaotic feel to open with and a neat shouted portion, before reverting to their normal beatdown patterns, and finally closing out with the hardcore staple: the gang vocals. Playing the diverse game in these songs is a strength and I wish Hostages embraced that a bit more.

Lyrically, Hostages hold nothing back. This record is gonna offend you and the PMRC would be drooling over themselves to absolutely smother this record in Parental Advisory stickers, which makes the self-awareness to slap one on there even more hilariously ironic. There is no subtext; Climate of Hate is blatant as fuck. “1312,” “Tyrant,” “No Justice,” amongst others, call out the racism inherit in institutions like policing or capitalism. They back this up with tunes like “La Muerte Roja” or “Spite” which attack Nazis, the KKK, Proud Boys, the fascists, the racists, all who are drawn to those institutions and make not-so-strange bedfellows with them. In other places “Climate of Hate” and “Burdened” relay the ever-widening income-disparity of late-game capitalism and how that system intentionally drives profits up while abusing and discarding those not ‘winning.’

It is abundantly clear which side Hostages are taking as retribution is the overarching theme whichever darkened alley they walk down. Lines like “Drag them to the street / Mob justice brings us peace” (from “Tyrant”) or “We all bleed the same fucking blood and / I’d love to be covered in yours” (“Climate of Hate”) are spit out with an unblemished fury. Even the snark in lines such as “This last stab goes out to the supposed master race” (“La Muerte Roja”) or “I’m so sick of these racist pieces of shit / Spitting their hatred / When they should be spitting / Their fucking teeth” (“Spite”) is fucking brutal.

There is no space for discourse and discussion here. This is an unrelenting slab of this-is-how-it-fucking-is beatdown hardcore. All in all, Climate of Hate is the reminder to the capitalists, to the racists, to the fascists, that have benefitted from the white supremacy of capitalism for hundreds of years that, be grateful the movement is asking for reparations. Climate of Hate hits like a bag of bricks to the face of the cops, the Nazis, the racists and fascists they call out throughout the record. Climate of Hate is what it looks like when they start thinking about revenge.