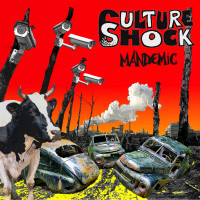 Mandemic might be the most… metaphysical... Dick Lucas has ever been. While fronting anarcho legends The Subhumans, Lucas has spent decades blasting religion - usually organized, but sometimes at the concept of supernatural essence itself. But here, on Culture Shock’s surprise new album, he suggests that there is a sort of cosmic war occuring right under our feet.

On the title track, he calls out, “On the one hand we have nature on the attack / we been messing with the food chains / if you mess with the balance it bites you back / humanity's end game!” It’s an interesting turn, especially since it fits right into the same thesis that Lucas and all three of his main bands (Subhumans, Culture Shock, Citizen Fish) have been making since each of their inceptions. Lucas very much pitches anarcho politics and advocates for the dismantling of corporate power, which he argues divides people and destroys the world for the profit of a select few. In this age of Covid lockdown, that’s certainly true, at least directly- that creep Bezos is richer than he’s ever been and that’s the direct result of corporate failure to control its results and corporate ability to exploit death and tragedy.

So, that’s why it’s interesting that here, while Lucas does point his finger at capitalism, he suggests that the earth itself is an organism striking back trying to eliminate its own plague - humanity. But, whereas Rudimentary Peni or (classic era) Amebix would pull that idea to higher levels of astral musing, Lucas takes the evidence and hammers it back down to further support his argument. "Don't you worry if you're out of step / What you see and what they promise is never what you get” Lucas laments on “Consequences.” That is, he’s not wondering “why are things the way they are…?” He’s straight up saying, “HERE’S why things are this way and we need to do something!”

Yet, in true Culture Shock style, whereas most bands would back this dire message with abrasive, grindy music, the CS boys support the whole thing with bouncy ska and post-punk. Interestingly, whereas many Culture Shock releases tend to pull from spacey, looming riffs reminiscent of Gang of Four and Wire, here the band is in a juiced up mode. Multiple skas are straight up ska-bouncers and could pass for Citizen Fish tunes. My favorite aspect of Culture Shock is their willingness to use open space as an instrument itself, and they break that out on the records b-side. As always, ina nod to reggae, they include a dub of “concentration” and have some fun dropping a tap dancing guitar and ghost house piano over the rhythm section. But, whereas reggae dubs are usually pulled back and drift in a sort of low, rumbling laggardly pace, the Culture Shock dub here feels jumpy and is constantly bucking forward. Perhaps unlike some other anarcho-bands, Culture Shock isn’t afraid to get arty and that pays off.

However, despite people (myself included) often say Culture Shock is an “anarcho band”, assuming that the label actually means something and is attached to a specific set of ideals, the closing track, “Too Much of Everything,” shows a remarkable level of nuance. Here, Lucas looks at the arguments of the left and the right, and makes the point that the conflict between these two sides is more complex than Fox/CNN shouting suggest. “Its a war we didn't expect between / freedom of speech and its consequences...you can't converse when the words are covered in chains.” That’s not to say that Lucas is suggesting that the right wingers are valid in some of their positions, because he’s not. But, he does seem to be suggesting that the left, when forming its own arguments, should be careful not to sacrifice important ideals for the success of others. If anything, he’s suggesting a more aggressive attack, as opposed to a defensive position: “They take us being quiet as permission to deceive / we better get loud, and watch it rebound.”

It’s not easy to balance nuance with powerful calls to action and a sense of fun. Between their bouncy riffs, howled refrains, and diatribes slipped in between big bass slaps, Culture Shock sure make it seem easy, though.