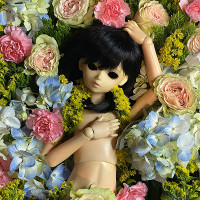 Dollhouse play super fast, super grimy hardcore. In fact, their first proper EP, The First Day of Spring is so ragged that it sounds like there may be a synth hidden behind the guitars- which alternate between space soaring and d-beat smash- but it might just be some sort of feedback or something else caught up in the mix.

A distinctly negative view permeates the release. On “This is Heaven,” the band spits out, “life passes by in bed, so why should we move… let’s starve together!” Or, it gets even more severe –“I was destined for fame at such a young age, but it was taken away by some pervert.” (The same pervert seems to appear on the title track). This sort of split-mind abstract lyric runs throughout the whole thing. It’s almost like we are picking up lyric fragments and threading them together. It works well, especially considering the band’s dual sonic identity. At one hand, we have the crashing, exploding crust guitar. But, on the other side, an almost power metal vibe pierces through the bleakness.

Perhaps most interestingly, while a lot of hardcore seems to revel in blackness and negativity for the “fun” of it, it seems like this release might actually be a soul bearing statement. As is stated on the title track, “poor ugly Isaac always had to cry, getting burns from the carpet he was rubbing on his thighs, the father was the reason why he turned out so bad, so sad, the worst friend ever.” That’s intense. And, if we take the lines for what they appear to mean, it also raises the question of how to discuss and interpret art that does seem to be so deeply personal. That in of itself is an artistic statement.

So, really, it seems that the EP is sort of a tangled web, that is specifically meant to have a different message for each person, as opposed to a universal statement- some people might like the contrast in sounds, other self-dissection, and maybe other just like the ruckus. Too often, hardcore bands devolve into units that do one thing and that one thing, needlessly so. Dollhouse have shown a great deal of complex depth here- to the point where a single analysis in of itself isn’t fair. This EP is a great pop. Here is a band that could potentially record a genre defining, and genre defying, LP. I bet they will.