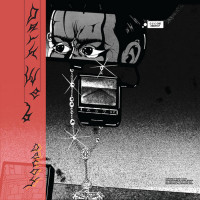 Dark Web’s second album, Decoy, juggles the playful and the horrifying. As before, the band is rooted in charged up, storming three-chord punk that recalls Ramone, Spits, and The Ventures equally. The whole thing is washed in an inky blackness that makes something even as innocuous as a snare sound somewhat sinister. Ever guitar strike, every bass snap, every meathead-howl is an intense punch, so the band sounds really, really angry, even when they are being silly.

“No Fun II”, which continues the trend of jacking titles from classic bands (“Iron Man II” was the first one), is built off an amusing concept, but as they band howls out in a vampiric-robot hiss, there’s that trick that guys like Danzig and Lux Interior were so good at- taking what was supposed to be sinister but wound up being silly, and making it sinister again. On “Parasitic Twin” they bark out, “Parasitic Twin, knocked me out of my life!” On one hand, it’s kind of a funny Troma style concept, but on the other hand, it’s kind of straight up gore horror that then suggests paranoia is the real culprit here. That is, with these tunes, while they are rooted in a b-movie and ‘70s horror context, you can dig below that… and keep digging.

While the record isn’t a radical departure from their previous works, they do make the intentional choice to make this record clearer with higher fidelity. It works. Frankly, a lot of garage-ish bands will use messy recordings and extra-reverb to make not-so-exciting songs sound a little more exciting. Here, though, Dark Web want every note and blip to be clear because these a acutely honed, revved up sprints. It’s a choice that pays off, especially since some of these tunes blast forward with force equal to those classic Adverts recordings… or there’s “Land of Dead” which is delivered with an Ozzy-style horror moan. The band is good a setting the scene and letting the rest playout in your head. As many a master horror director will say, what you don’t show is scarier than what you do, and Dark Web knows this well.

That being said, there is still a lot of fun here. The jam that takes up the second half of “Land of Dead” is just a great old school track blast up. Tracks like “Clone Age” and “Insect” have fun synth sound effects that lets you know the band is serious… but not too serious. The fact is, Dark Web have mastered their sound and have refined it to be about as sharp as it can be- and that’s sharp indeed… almost to the point where it’s threatening…