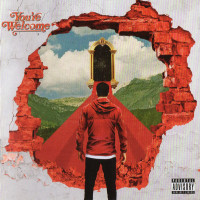 A Day To Remember always pandered to the lowest common denominator of the late 2000s, early 2010s ‘defend pop-punk’ movement. They did the requisite tours with the likes of blink-182, had the Chad Gilbert produced album, sold tons of merch with bold neon letters, and managed, in spite of that, to amass a ton of fans. They are arguably one of the most commercially successful bands of any from that era because of these choices and a high profile fight with Victory Records that led to undeserved pent up demand for more of the same from the band ahead of their Common Courtesy album at the height of the defense of pop-punk's notoriety.

Now, appealing to the lowest common denominator with sugary pop, metalcore lite breakdowns, and cookie cutter growls was a good game in those days. It was the perfect sweet spot of tough guy laden mainstream rock music with enough appeal to attract an audience at scale and a supportive tour system of look alike bands who all had some variation on the same defend pop-punk t-shirt. The band was unremarkable in almost every way in that sense. So after a five year absence in which I’m sure some missed them, A Day To Remember are back with a new full length and their first for Fueled By Ramen after years of releasing albums independently. It begged the question when this popped up on some algorithm curated playlist and forced into my recommendations because of its vague associations with punk rock from my preferred streaming app what the band was offering in 2021. I had to know.

That answer - and it brings no pleasure to say this as someone who loves defending bands’ weird turns in their discography and clear sell out moves - is likely one of the worst albums of 2021. You’re Welcome is what happens when algorithms take over independent thought and regurgitate a soulless imitation of something similar to rock music. And by rock music, I mean something that would be considered adjacent to a band like The Chainsmokers. It’s similar in that sense to All Time Low’s latest or blink 182’s Nine where the band made no qualms about trying to write a pop record with huge pop production and co-writing credits. I’m not opposed to these types of records, particularly if their hooks can carry their cheesiness. Again though, that is not the case with You’re Welcome.

“F.Y.M.” is pretty much the only track you need to listen to on You’re Welcome. Sounding like something off Katy Perry’s debut, vocalist Jeremy McKinnon sings over and over, “Wait till I get some fuck you money” as synth plays in the background over guitars and drums so overproduced it makes the autotuned vocals sound damn near human. It may not be fair to judge an album off a song, but “F.Y.M. succinctly demonstrates You’re Welcome’s core offenses. Sure, you can find moments of something resembling A Day To Remember in the occasional screams and breakdowns on “Brick Wall” or “Last Chance to Dance (Bad Friend),” but even then, they’ve been bastardized in a way that would make Jacob Shaddix of Papa Roach seem like a really hard motherfucker if you were listening to that one screamo record Papa Roach tried to make after nu-metal went bottom up.

With albums this bad, there is an ability to have redeeming value if they cross the paradigm into self-aware. While not many would argue Cobra Starship were better than Midtown, at least Cobra Starship knew the joke was on them. They really had a song called “Pete Wentz Is The Only Reason We’re Famous” with a lyric about their haters riding Cobra Starship’s dick to the top. It does not appear that’s the case with You’re Welcome despite ostensibly being label mates with the now defunct Cobra Starship. That’s why when the band gets to “Only Money,” a heartwarming song about the musical influence of an encouraging grandma’s actions, you can’t help but wonder if the band is being self aware in the form of apology. McKinnon sings, “It was only money / Doesn’t define me / I can’t pretend.” You’re Welcome definitely can’t pretend money doesn’t define it.

Continuing on that same thread for just a moment of further self indulgence that brought Pete Wentz into this review, it’s as if A Day To Remember heard Fall Out Boy’s last few albums and thought people will actually remember them for centuries. This includes incorporating “whee-whaa” electronic beat drops that you can hear off in the distance at 3:00 am while walking away from an EDM post-show late in the night on nearly every song. And sure, that’s probably where A Day To Remember is aiming for at this point given the general collapse of their previous defend pop punk brand, but Fall Out Boy were smart enough to get out before any such defenses of their first couple offerings of pop-punk were made. A Day To Remember is no Fall Out Boy.

All this is to say is You’re Welcome is bad. Not just comically bad, but actually bad in a way that makes Travis Barker’s recent moves cultivating the likes of Machine Gun Kelly and other face tattooed emo rappers seem like an appealing endeavor in the fight to defend pop-punk.