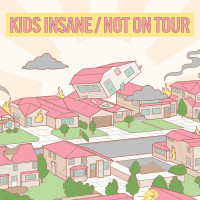 Kids Insane / Not On Tour

The first time that I had listened to Not On Tour was when I reviewed their stellar 2019 album, Growing Pains. And now the band is back with 3 new songs on a split 7-inch with fellow Israelis, Kids Insane. The latter band is new to my ears despite the fact that they have been around for about 10 years or so. This is why I love splits. A band that I already enjoy introduces me to another band that I hope to become a fan of. And that’s what happened here.

Kids Insane kick things off with a 41-second melodic hardcore tune, “Four Hearts”, which quickly grabs the listeners, but lets go before they even know what happened. It is simultaneously frantic and tight with heavy vocals that are not quite shouting, but not quite singing. The second track, “Do Anything” is just as frantic with quick chord changes and a great blend of tones that highlight the mixture of melody and grit. It ends with a breakdown that ties together the various different hardcore sounds. And the last track, “X Ray Vision”, is a bit of a departure from the other two songs, all but guaranteeing that the listener won’t grow tired of the same ol’ formula. It’s a slower song with a more traditional structure, but it is just as powerful as the rest of Side 1.

The opening track for Side 2 (Not On Tour) pretty much picks up right where Growing Pains left off. “Desperation Street” is just as frenzied with a mixture of constantly changing drumbeats, powerful guitars and heavy bass mixed with melodic tones, and vocals that are alluring with a touch of angst. The next track, “GMSN” shows that the band is definitely not taking themselves too seriously. It’s a mid tempo song with a pretty normal punk drum beat. And it simply repeats the band members’ names over and over, ending with laughter from Sima, the lead vocalist. Somehow it works and it’s catchy as hell. The last track, “What Future”, the longest song on the whole record clocking in at 1:36, is a fitting end to the 7-inch. Starting with a mid-tempo beat (a good segue from the previous track), it picks up speed pretty quickly with the drums mimicking the vocal rhythms, highlighting each musicians’ ability to play their instruments really well. It appropriately ends with Sima singing, “We’ve got to keep going. No future for me.”

With 6 songs all finishing in about 90 seconds or less, this record could easily be mistaken as simple. But it is far from it. Both bands offer songs that are complex, but easily digestible. It’s a fun little collection of tunes that will challenge the audience to listen a little closer upon each spin.

A Day To Remember: You're Welcome