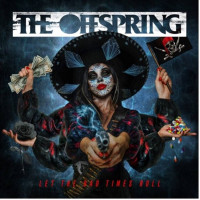 The Offspring are a generational institution at this point with multiple entry points for fans of the band. Don’t believe me? Put on their music at a party ranging from middle-aged adults to teenagers. You’ll see the differences immediately in who sings along whether you put on “Self-Esteem,” “Pretty Fly (For A White Guy),” or “You’re Gonna Go Far, Kid.” If you’ve never heard of that last one, then you’re likely like me in the sense that my introduction to The Offspring was through their Americana album at the age of 12 in 1998. In fact, I had never heard that song until doing some research to write this review for their new album Let The Bad Times Roll. Suffice to say I was surprised to find out it’s actually their top streamed song on Spotify from their entire discography. It's off 2008’s Rise and Fall, Rage and Grace and has collected nearly half a billion listens!

But I digress. The question of what an album from The Offspring offers in 2021 is one of relativity. When they released their first single off said album, the eponymous song hit me much in the way most singles I was aware of do from The Offspring. It was a humorous song about the shit show that was the last few years with enough ear worm appeal to knock the cynic out of me. I was hooked in and made my plan to tune back into the band that I largely strayed from ahead of the release of Let The Bad Times Roll. The song had that Southern California beach vibe as danceable acoustics, hand claps, and Dexter Holland’s classic vocal style - complete with their trademarks ‘woahs’ - were peppered into this obvious single. A throwaway pop song unless a massive hit with radio, but much less embarrassing than something like “Cruising California (Bumpin’ in My Trunk).”

Despite being one of the most successful legit rock bands of the last 30 years and icons in their own right, one of the unique features about The Offspring is how they never veered far from their original sound. At least not in the way contemporaries like blink-182 and Green Day have throughout their careers. The Offspring have a trademark sound and a classic album tracking. If it’s not broke, don’t fix it and Let The Bad Times Roll is another offering in that sense. Opener “This Is Not Utopia” kicks off the album with one of the most recognizable efforts on the release. The song wouldn’t sound out of place on any recent Bad Religion album and fans dating back to Smash should find it at least moderately enjoyable. Other songs carrying that same energy are “The Opioid Diaries” which channels the ethos, if not the immediateness of “The Kids Aren’t Alright,” and “Hassan.” The latter is a dead ringer for the previously released “Da Hui” from Splinter.

Across any Offspring record, you will get a smattering of songs like those described above, a few cheesy pop songs, and some mid-tempo (in the punk sense) rock songs aiming for the stars. “Army Of One” uses a surf riff that sounds like a radio safe homage to the Dead Kennedy. The song has one of the most anthemic choruses on Let The Bad Times Roll. Probably impossible to review this album also without mentioning “We Never Had Sex Before.” Unfortunately, that’s not a compliment as the song sounds like a pretty-straight forward Cherry Poppin’ Daddies-esque swing tune that will even more unfortunately get stuck in your head. I guess in that sense it’s hit or miss, but probably more hit for the frat culture The Offspring have unfortunately dipped their toe into.

So there you have it. Let The Bad Times Roll is an Offspring record. It’s neither an offensive or inoffensive addition to their discography. If you like The Offspring, give it a listen. There’s something for fans of all eras, but it’s not likely going to grab you the way your entry point did. In that sense, it’s fitting they closed the album with a piano-laden cover of Ixnay On The Hombre’s “Gone Away.” A killer 90s radio rock song that didn't need the update.