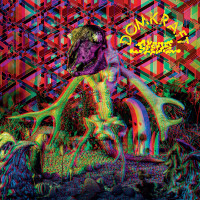 I was obsessed with stoner rock when I first discovered it. When Kyuss and Fu Manchu hit my ears for the first time I felt like I’d found something I could always vibe with. The issue was, that for a while there wasn’t a great deal out there better than those guys. I moved onto listening to Sleep, then High on Fire and from there moved to different forms of metal as the number of truly great albums in the sludge/stoner genre seemed to dry up a little (pretty sure someone is going to take exception to that, but so be it). All this is largely just to position myself as a fan of stoner rock/sludge but maybe not as fervently as I once was. Resultantly, I only really listen to standout records of this ilk and that will be maybe one or two a year. A few more in the last few years maybe. So the natural question is whether Domkraft can compete with the best in the bracket or not?

A bit more about the band first. This is the third album from the Swedish 3-piece and the follow-up to 2018’s Flood. Domkraft are very firmly rooted in psychedelia and given that fact along with the root basis of their sound, there are similarities that can be drawn to fellow Swedes Graveyard. At points, you can almost hear a less technical and more bruising version of Reflections of a Floating World-era Elder. I say less technical quite pointedly because Domkraft lean very heavily on the, well, heavy. There is immense weight to their sound and the roiling, bludgeoning experience of some of the riffs throughout is surely their biggest strength. Album opener/title track “Seeds” is maybe the most obvious example of this, when at the 1:20 mark, an absolute monolith of a riff comes in and sets the record’s stall out very effectively. From that point onwards, musically speaking, the song is built around some variations of that riff, a relatively consistent bassline, some mid-tempo drum patterns with a bunch of fills and some psychedelic solo periods. It’s undeniably fun to listen to, it’s just maybe not that inspired.

The record is made up of six ‘proper’ tracks and one (“Krank Blekhet”) 1-minute interlude. Three of the actual songs are around the nine-minute mark, which is not unusual for psychedelic sludge of course, and means the record as a whole comes in under 45 minutes which is probably the right sort of length, being honest. Because there isn’t a huge degree of dynamism in the record. Cue the cries of “It’s not supposed to have…”. Yeah, I get it. But if you look at records from The Ditch and the Delta, Ohhms, Elephant Tree or even the collaboration work from Thou and Emma Ruth Rundle from the last couple of years, you can see a huge amount of variety. Not only between them, but within the individual records those artists have put out. There is a primal enjoyment I get from the introduction of their big riffs, like at the beginning of “Dawn Of Man” or “Perpetuator” but that feeling can only sustain a song for so long.

There’s no question that Domkraft are good at what they do. If you’re into the DesertFest, heavy rock/blues-influenced side of doomy stoner then you’ll dig this. I enjoyed having an absent-minded headbang to it while I was listening to it, I will say that. It’s just that I don’t know if there is quite enough here to keep me coming back.