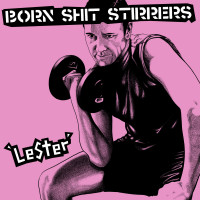 Chaos. That’s what drew a lot of us to punk and hardcore decades ago. The most exciting bands were the ones that always seemed to be on the brink of falling apart. Or bursting into flames. Born Shit Stirrers have that crucial element that is missing from so many modern “punk” bands. Chaos.

Born Shit Stirrers are a Japanese band fronted by a British ex-pat. The drummer is definitely Japanese, but I’m not sure about the rest. Lester is the quintet’s first vinyl release after a handful of mostly self-released CDs. It’s 22 songs in just under 22 minutes on a slab of fleshy pink wax.

The sound is kind of like the mid 90’s pogo punk revival, but with more hardcore and less street punk. The vocals are snotty and abrasive, and when the occasional female vocals kick in, BSS remind me of a slightly more spastic Blanks 77 or Blatz. It will make you want to drink 40s and fistfight.

The songs are short, angry and usually funny. Sometimes they’re more like complaints than songs, but that’s part of the charm. Also, BSS are not afraid to curse. The “F word” abounds. And let’s not forget the “C word”, which is much more jarring to American ears. Ironically, the “C word” is often a term of endearment. Apparently, the much more harmless sounding “wanker” is a much bigger insult. Anyway, I digress.

There are some genuinely great rants on Lester. There’s the snotty punk of “Bored of Education”, “Politically Uncorrectable”, “Look Mam No Bands” and “Fuck My Fucking Life”. Other songs like “Two Faced C*nt”, “We Get It Already You’re Vegan Straight Edge”, “Marked Safe Pricks” and “Smash Your Smartphone" go straight for the jugular. I would feel especially targeted by “Old Punks Are All C*nts”, if I were the type who was soft headed enough to be offended by a punk song.

There’s actually a decent amount of sonic variety on Lester. “Passive Aggressive II” is a humorous spoken word piece. “Kurosaki” is a Japanese reggae instrumental. The record’s closer is an odd choice, but it works. It’s a cover of the semi-pornographic retardo-metal song “Quack Like A Duck”. It was originally done by someone called GOAT and Your MOM. The name might not ring a bell, but you’ve probably heard it.

In conclusion, if you’re looking for a punk soundtrack to play in the background while you drink Bud Light on your patio, Born Shit Stirrers are not going to be for you. However, if you need something to listen to while on a drug and alcohol fueled crime spree, you could do a lot worse than Lester.