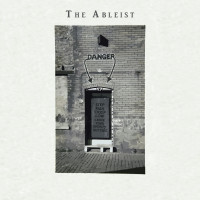 It’s April already, which means we’re incomprehensibly a quarter of the way through another year. Another weird, way-too-eventful, Groundhog Day-esque year. Too early to take stock of the year thus far? Probably, but don't stop me now. A quarter of the way through 2021, the Ableist’s self-titled debut is my favorite punk record thus far, and it really isn’t even that close.

There’s a lot to like about The Ableist, from its super catchy amalgamation of pop-punk and post-punk, it’s blatantly outspoken politics and the-personal-is-political lyrics, the driving guitars that shine in their moments but also hold the whole mix together, and vocalist Paul Scanty’s always comprehensible, but still rough and crusty bark interchanging with near spoken word passages. But quite possibly my favorite part is the cast of guests throughout, showing up on almost every song. Hold up, you say, if the best parts are from the contributors, not the band itself, are we really getting the best of the Ableist, or is it just their all-star guests that are propping this record up? I get how on one hand it’s a cop out (I’m sure they’d hate me using the word ‘cop’ while reviewing the record without surrounding it by ‘all … are bastards’) to over rely on guest vocalists, using that as a crutch to diversify the sound and make individual tracks stand out. That’s not what’s going on here though. This is less crutch and more there-is-power-in-a-(one big)-union approach to guests. What are radical political movements without the organizing, after all? As well, it’s been a well-documented year-plus since shows. There’s just something so inspiring about having so many friends in one place. Music scenes are their own little sort of community and it’s so cool to see that reflected with the Ableist.

Musically, there’s a couple recurring themes amongst these thirteen tracks, excluding the obligatory, moody, middle of the record instrumental passage in “So Said the Birds of the Coming Storm.” One of the tenets is this spoken word style singing that’s used to great effect throughout. It adds a depth to the songs; just look at the way opener “The Last Go-Round” veers between spoken-word and a shouted delivery, and uses the upping intensity of spoken word as a segue into the shouts. This dichotomy of spoken word singing mashing up with more traditional punk stylings is on display in highlights like the aforementioned opener or “Aelita” (where Turnspit’s Gillian McGhee guests adding some fantastic vocal depth); both of these have moments that feel more like a traditional punk song, with catchy choruses, but those spoken passages give a different feel. The extreme of that is “Spastic or Something (Part I),” which totally has this storyteller feel with this slowed down, dramatic middle passage.

The Ableist dig deep into the post-punk feels too. “Aquamarine” and “Early in May” are both more mellow, mid-paced with a dreamy vibe, as if shoegaze threw its eponymous shoe into the studio. Elsewhere, we start down that road with “Sybil Vane is Dead,” jangling along with the post-punk mood before really digging into an up-tempo punk race. I like the way the drums start to tease that pace change, before the bottom drops out completely and it’s like, fuck-it, we’re gonna play fast here.

And that’s the last of the Ableist’s trademarks, these faster, furious punk songs, mostly of which hit hard on the politics. There’s an emotional heft with a lot of these tracks (“Aelita” particularly, about a dead friend), but the radical anarchist politics come out heavy in some of these. There’s up tempo, furious songs like “Lullaby” or “And Your Band Sucks, Too,” which blast away faster and more furious than most everything else in these forty-five minutes. But, for my money it’s the stretch between “Sucked Back into the Sun” and “Subjugation of Skin (Part II)” that’s the highest of highs here.

“Sucked Back Into the Sun” is super catchy, with just a hint of the post-punk beat, and is maybe the most bluntly political song here, Emma Goldman soundclip and all. It has a bit of a Star Fucking Hipsters/Leftöver Crack feel, with guest vocalist Alice Kraynak really shining in what's basically a duet. The ending chaos is absolutely glorious. Amongst a bunch of highlights, this is probably my favorite track here. “Sore Subjects” is equally political, the kind of hang-and-shake-your-head-I-know-what-you-mean lyrics, but musically a kick-ass near hardcore stomper with a three-pronged vocal attack. “Written in Red” keeps the political drum banging, with a fun, catchy, furious chorus that's built for sing-along; indeed it's one of the many vocally layered elements throughout. “Subjugation of Skin (Part II)” is another one of these tracks that vacillates between the spoken word sections and a more traditional punk furor and is fucking triumphant. Both of these latter two just seem to be built for a live environment at some sort of rally or fundraiser in a dingy bar or DIY space, where we can all sing along with our friends. Until we get to that point again, be sure to blast the Ableist, read the lyrics, take it to heart, and let them inspire you. Truly fantastic stuff.

Field of Flames: Remnants Of a Collapsed Existence [EP]