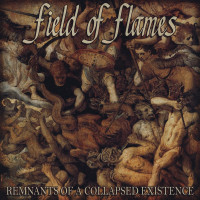 Straightedge hardcore has seen a pattern develop in recent years, with standout bands such as Torso, Year of the Knife, and Rain of Salvation emphasizing (and escalating) the metallic roots of hardcore over the punk; while also steering away from the overhyped lyrical positivity of the straightedge acts of yore, electing instead to focus on the darker elements of humanity and daily life. San Jose’s Field of Flames is right there with them, recently releasing their second EP, Remnants Of a Collapsed Existence.

Normally I’d be the first to send a cynical side-eye to an instrumental intro track of more than, say, 45 seconds length. But the title track here, while having the buildup mood of an intro, should actually not be considered such. It’s a song on its own, just not one that requires any words. It’s gloomy and powerful, bringing you right down into the hell depicted on the cover art. “Confusion Breeds the Fear” has all the bones of a traditional hardcore song, and showcases the surprisingly remarkable rhythm section, but is highlighted by metal power riffs and strong lyrics calling not for fighting the power, but for the absolute bloody destruction of it.

“Fallen Angel” is at times a speedier and even louder track than its predecessors. The riffs do get chances to stand out on their own more, and so do the rapid fire vocals that you can practically feel the spit splash from. But there are also more subdued moments that bring a better sense of texture to the chaos. The closer “My Final Exit” is an unapologetic demonizing of ones own life, and the potential relief that would come when it’s over. Despite its dark content, musically this is a rather playful track. There are great tempo shifts, nu metal inspired melodies, and fantastic use of space, especially in the drums. And to end things on a positive note, the singer finds a reason to hold on for just a little longer; a redemption in a time of crisis: “In defense of all that I love/I will fight this war.”